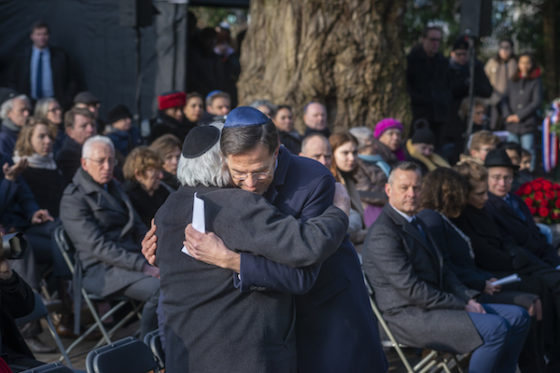 Prime minister Mark Rutte used his speech during the national Holocaust Memorial Day ceremony in Amsterdam on Sunday to apologise for the actions of the Dutch government during World War II.

‘At a time when the last survivors are still among us, I apologise today on behalf of the government for what the government did back then,’ Rutte said.

It is because so few survivors are still allive that ‘we must fully acknowledge what happened at the time,’ Rutte said, speaking at the Nooit meer Auschwitz memorial in Amsterdam’s Wertheim park.

‘When a group of countrymen were set aside, excluded and dehumanised under a murderous regime, we failed,’ he said. And while there was some resistance within government, ‘too many Dutch officials carried out what the occupiers demanded of them,’ he said.

Rutte said he was apologising in the knowledge that ‘no word can express something as big and horrific as the Holocaust’.

‘It is up to us, the post-war generations, to continue to commemorate, to honour the dead by name,’ the prime minister said.

Those who returned found their houses and possession had been taken, and many were presented with bills for unpaid taxes and ground rent for their homes, scandals which are only now finally being dealt with.

In 2018, Dutch state-owned railway firm NS said it would pay compensation to survivors and family members of people it transported to death camps.

NS earned large amounts of money from the German occupiers by transporting Jews to Westerbork, the holding camp where people were kept before being moved out to Germany and Nazi-occupied Poland.

The prime minister’s apology has been welcomed by Jewish groups and survivors. In 2012, Rutte said the cabinet saw no reason to apologise for the Dutch government’s attitude to Jews during World War II.