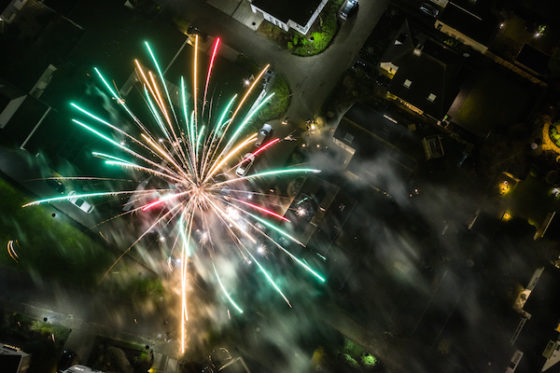 A man and his four-year-old son died in a fire at a block of flats in Arnhem during the New Year festivities which appears to have been caused by fireworks, the fire brigade said on Wednesday morning.

Two other members of the family, who were visiting the complex, were seriously injured in the fire. According to some reports all four were in the lift which filled with smoke during the blaze and had come to a halt when power was lost.

Police told Radio 1 news early on Wednesday afternoon they are questioning boys aged 12 and 13 and that surveillance camera footage shows the blaze was started by fireworks.

‘This is a terrible event which will have a major impact on the lives of everyone involved,’ Arnhem mayor Ahmed Marcouch said on Twitter.

Elsewhere the New Year celebrations involved the traditional car fires and attacks on emergency service workers and arrest totals are still being calculated.

However, in Duindorp in The Hague, where there was a major police presence following the decision not to hold the traditional beach bonfire, there was little trouble, police said.

In total, the Dutch spent a record €77m on fireworks this year, according to the Dutch pyrotechnics association. The biggest public display took place in Rotterdam, where tens of thousands of people turned out to watch the national countdown to 2020.

In Bovenkarspel, in Noord-Holland province, a windmill dating from 1848 was totally destroyed by fire probably caused by a firework. There were other fires in Veendam, in an old school in IJsselstein and in a storage space for old paper in Amsterdam. In Vught fireworks caused considerable damage to the railway station.

The Jimmy Woo nightclub in Amsterdam also had to be evacuated after a firework entered a window and caused a small blaze, according to local broadcaster AT5. Officials in Amsterdam described the celebrations in the capital as ‘unruly’.

In Rotterdam, firemen were called out to deal with 709 incidents. ‘This was not a quiet New Year and certainly not a tradition we should be keeping,’ local security chief Arjen Littooij told RTL Nieuws.

There were ‘dozens’ of car fires in both The Hague and in Utrecht, where 38 people, most of them minors, were arrested. Six cars were destroyed by fire in the Brabant village of Veen, three were set on fire in Uithorn and at least seven in Eindhoven.

In Zwolle, a 52-year-old man was shot dead and police say they do not yet have a clear picture of what happened. No-one has been arrested.

Heavy mist, in the north of the country in particular, reduced visibility on the roads and one woman was killed in a multi-car pile-up on the A32 highway near Akkrum in Friesland earlier in the evening.

According to the AD, another woman died in a car accident in Drenthe.

The mist is still causing delays at Eindhoven airport.

A total of 18 people were treated at the specialist eye hospital in Rotterdam and half of them will suffer permanent damage to their vision, doctors told RTL Nieuws.

The youngest was 14-years old and none of the victims had been wearing safety glasses. Eye specialists have called for a ban on consumer fireworks for years.