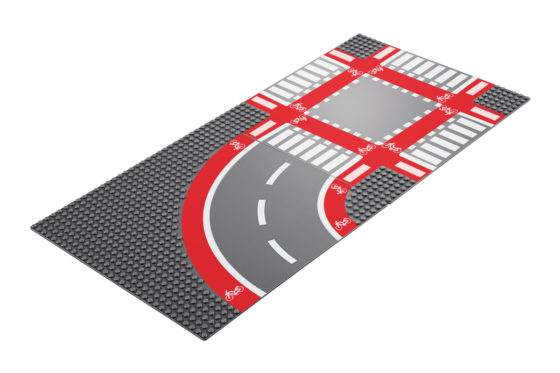 It has cyclists, railways, crossings, cars and roads…but no bike lanes. Now Dutch regional councillor Marcel Steeman believes that the highways of Lego’s play world should reflect today’s desirable city life – with plenty of space for the bicycle.

With the support of Marco te Brömmelstroet, associate professor in urban planning at the University of Amsterdam, Steeman is lobbying Lego to include more space for the ‘self-powered’ mini citizen on its roads.

He has twice submitted designs to the Lego Ideas initiative, hoping to get 10,000 supporters to make them reality.

‘I was playing with Lego with my kids and there were Lego cyclists, but I wondered where they had to cycle,’ he told DutchNews.nl. ‘If you are Dutch you are used to having cycling lanes.’

So he asked the question of Matthew Ashton, producer of the Lego movies, on a Twitter Q and A session in 2018. ‘Things started happening quickly. I had 2,000 Likes on Twitter in two and a half weeks, and lots of positive reactions. I thought that I could get 10,000 supporters for Lego ideas, so I set to work.’

Unfortunately, he said, two designs have been rejected for apparently not falling within the toy manufacturer’s conditions. ‘The problem is that Lego is a worldwide company and traffic rules are not the same,’ said Steeman. ‘You can draw a red Dutch path, but it doesn’t work in the US or Australia, or even Denmark, which has blue cycling lanes.’

He added that he was advised that ideas should not make political statements either, and has been trying to contact Lego to help revise his idea to meet its norms.

‘It’s really logical and I hope Lego will go with it,’ he added. ‘It’s about a more eco-friendly life, more movement for children, all Lego ideals. It’s strange that it isn’t there already – although I believe that in the early 1990s there were bike paths until the cars were made bigger and they were squeezed out!’

Te Brömmelstroet, who has given the idea a huge boost under his Twitter moniker, the Cycling Professor, said the campaign has only just begun. ‘The responses are overwhelming,’ he told DutchNews.nl.

‘It touches a nerve with many people, especially when they see how [the Lego cityscape] changed over time (and how it symbolizes the increasing monopoly of the car). Lego Ideas rejected the first attempt for bureaucratic reasons. Marcel Steeman…will not stop before it will be produced. And neither will I!’