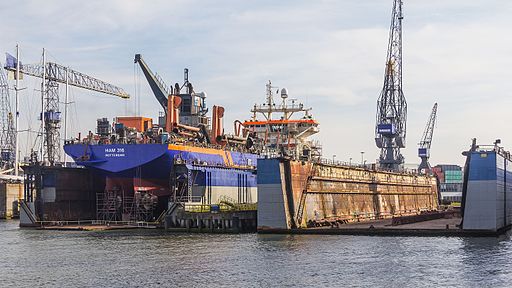 A partnership between Dutch shipyard Damen Shipbuilding and German firm Blohm and Voss has won the biggest ever German navy order after a European tendering process, the Dutch firm confirmed to DutchNews.nl on Tuesday.

The combine will build four fMKS 180 frigates with an option for two more in a deal said to be worth €5.3bn.

The ships will be mainly built at the German company’s yard in Hamburg, with the Dutch supplying know-how and design. Around 80% of the total net investment will be spent in Germany, and around 70% of additional services will be provided by German subcontractors, including the German subsidiary of Thales.

The two companies had lobbied hard for the order and faced tough competition from a consortium made up of German Naval Yards and ThyssenKrupp.

In 2018, Damen and Blohm and Voss executives wrote to all German MPs outlining their case for the contract.

Not only would the deal safeguard hundreds of jobs in Hamburg, but ‘more than one hundred German supplier companies of different federal states would be involved through numerous subcontracts,’ the letter stated.

The project provides national knowledge and expertise to the Netherlands, Damen told DutchNews.nl in a statement. ‘This offers the Dutch government the option, in pending Dutch naval construction projects for frigates and submarines, to have these types of strategic programmes devised, engineered, managed and deployed in their own country.’

The deal is still subject to German parliamentary approval.