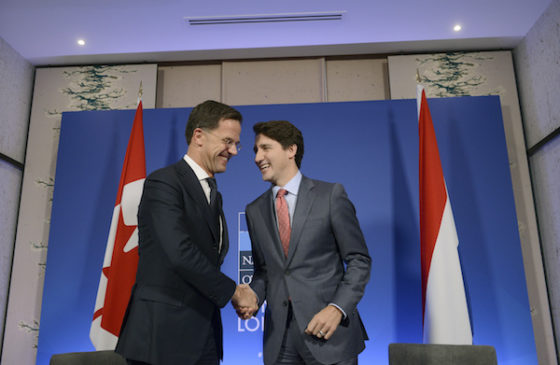 The video was shot during a reception held at Buckingham Palace for Nato leaders following their meeting in London. The film was taken by a pool press camera and first posted online by Canada’s CBC.

Trudeau could be heard telling the group ‘he takes a 40-minute press conference off the top,’ prompting more comments and laughter from the group, although Trump was not mentioned by name. The Canadian prime minister told reporters later he was referring to Trump’s long, impromptu question-and-answer session with journalists earlier on Tuesday.

Rutte told Dutch reporters later that the chatter was ‘meaningless’. ‘We were standing at the reception for hours, so then there is a bit of gossip,’ he  is quoted as saying in the AD. ‘But it was not mean, it was about nothing.’

.@JustinTrudeau, @EmmanuelMacron, @BorisJohnson and other VIPs shared a few words at a Buckingham Palace reception Tuesday. No one mentions @realDonaldTrump by name, but they seem to be discussing his lengthy impromptu press conferences from earlier in the day. (Video: Host Pool) pic.twitter.com/dVgj48rpOP