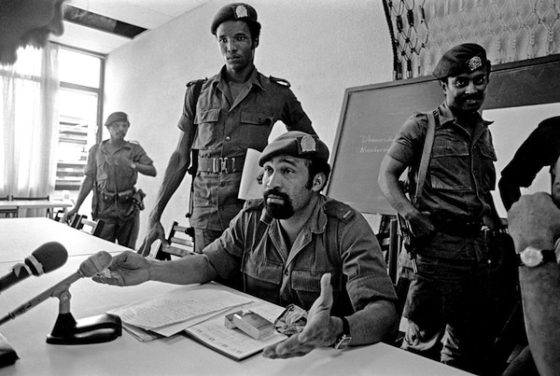 Desi Bouterse gives a press conference after the alleged coup by his opponents in 1981. Photo: Berry Stokvis/HH

The Netherlands’ Surinamese community has reacted with both surprise and relief at the decision of a Suriname court to jail president Desi Bouterse for his role in the murder of 15 political opponents in 1982.

The court examining the president and others’ role in the killings began its hearings in 2007. Bouterse has always denied any involvement in the deaths, which have become known as the December Murders.

‘This ruling has been too long in coming, but I am very happy,’ said Roy Ho Ten Soeng, of the Dutch Suriname Friendship Association. ‘This is justice’.

Others said they hoped Bouterse would now resign. ‘If he has any respect for the people and for democracy… then he should stand down,’ sociologist Fred Kartaram told broadcaster NOS. ‘He is the figurehead, the symbol of the Surinamese constitution.

Vincent Soekra of the Our Suriname Associaiton told the broadcaster that the end of the long process ‘brings hope’. ‘And hopefully, we can put the decades of tension behind us somewhat and work towards peace.’

Others have described the court case as a ‘show trial’ and a ‘political process’. And some 1,500 of his supporters turned up to welcome him back to Suriname on Saturday after a visit to China. ‘We want Bouta,’ they chanted, as they waved flags.

Bouterse grabbed power in Suriname in the so-called ‘sergeants’ coup’ of 1980. Two years later, after several attempted counter coups, 15 of his political opponents were rounded up and murdered in the infamous December killings, effectively establishing a dictatorship under Bouterse with a puppet government.

Bouterse has served as president since 2010, and was most recently re-elected in 2015.

The president did not go into detail about the case on his arrival back home. ‘The political game was played so openly that it was clear what would happen,’ he is quoted as saying by NOS, adding that he would ‘remain within the law’.

‘Politics has to be answered with politics,’ he said. Bouterse, who is now 74, has the option of appealing.

The Netherlands, France, Germany, Spain, Britain and the US issued a joint statement on Saturday saying that they appreciate the ‘challenging conditions’ which the military court operated in.

‘The integrity and independence of the judiciary is a pillar in Surinamese society,’ the statement said. ‘It is critical that the final verdicts in the killing of 15 innocent civilians … whatever those verdicts may be after the appeals process is complete – are implemented and upheld.’

The verdict, the statement said ‘will undoubtably prove instrumental in helping the nation move towards reconciliation’.

Suriname became a Dutch colony in the 17th century and gained full independence in 1975.

In 1999, the Netherlands tried Bouterse in absentia on drug smuggling charges. He was convicted and sentenced to prison but remained in Suriname.