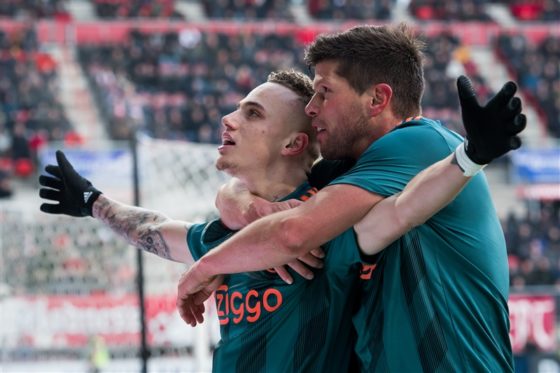 Noa Lang scored a hat-trick on his full debut for Ajax as the Amsterdammers survived a scare to overcome Twente Enschede.

The loss of Quincy Promes with a leg injury after 26 minutes looked to be a serious blow for Erik ten Hag’s side, who were 2-0 down at the time. But the 20-year-old Lang struck after 32 and 51 minutes to wipe out the advantage before substitute Klaas-Jan Huntelaar gave Ajax the lead. Lang’s third and a fifth goal by Huntelaar in injury time made the scoreline comfortable.

‘It’s a real boyhood dream,’ said Lang, a former Feyenoord youth player who moved to Ajax in 2013. ‘I’ve had to be patient for a long time, but it’s been rewarded now.’

AZ Alkmaar edged out VVV Venlo 1-0 in what they hope will be their last ‘home’ game in The Hague before they return to the AFAS Stadium. Japanese striker Yukinari Sugawara’s long-range strike five minutes before half-time proved decisive as AZ struggled to break down the Limburgers.

PSV slipped further behind the front two despite taking an early lead at Emmen through Daniel Schwaab. Marko Kolar tapped in from close-range early in the second half to equalise, while PSV substitute Konstantinos Mitroglou had a late header disallowed for offside.

At the bottom of the table, RKC crept back into contention with their second win of the season, a 1-0 victory away to Utrecht. Melle Meulensteen’s second-half goal closed the gap on ADO Den Haag to three points and handed Utrecht their third successive league defeat.

ADO slipped deeper into crisis as they went down 4-0 at Heracles Almelo, who climbed to fifth place in the table. Belgian striker Cyriel Dessers took over as the division’s top scorer with his 10th and 11th goals of the season.

Also going well are Willem II, who overcame Sparta Rotterdam by the same scoreline in Tilburg. Their fluid forward line of Ché Nunnely, Mike Trésor Ndayishimiye and Mats Köhlert all weighed in with goals, as did defender Freek Heerkens.

Feyenoord continued their revival under Dick Advocaat, with Steven Bergwijn’s rasping shot after 23 minutes proving enough to beat PEC Zwolle and lift the Rotterdam side to seventh place, level on points with Heracles and Heerenveen.

The latter added to Vitesse Arnhem’s woes by coming back from 2-0 down to win 3-2 with a penalty from Hicham Faik, a fine solo effort by Mitchell van Bergen and Jens Odgaard’s tight turn and shot. Vitesse have lost their last five league matches.

Fortuna Sittard moved away from the danger zone with a 1-0 win that ended Groningen’s run of seven matches unbeaten. Substitute Rasmus Karjalainen scored the winner on 78 minutes after Groningen keeper Sergio Padt spilled a shot by Mark Diemers.