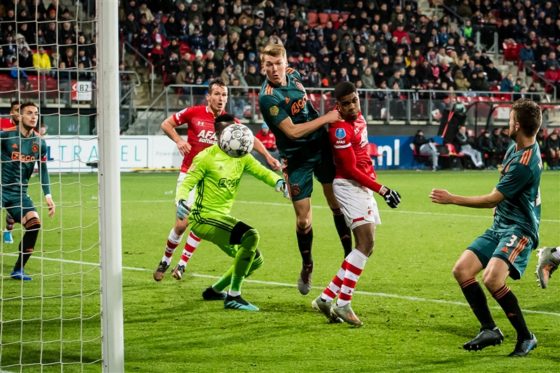 Myron Boadu nods in the winner for AZ against Ajax. Photo: Ronald Bonestroo/HH

A dramatic late goal by Myron Boadu earned AZ Alkmaar a 1-0 win over Ajax and brought the two clubs level on points at the halfway stage of the season.

The first match in AZ’s AFAS stadium since a section of the roof blew in on August 10 seemed to be heading for a goalless draw until Boadu popped up in with a 90th-minute header.

AZ were the more dangerous side in the first half, with Boadu twice breaking clear in the opening 20 minutes, but Ajax’s Donny van de Beek had the best chance when he dragged a low shot just wide.

In the second half AZ’s Marco Bizot had to react smartly to block efforts by Klaas-Jan Huntelaar and Hakim Ziyech, and parried Per Schuurs’s long-range strike. But just as the teams looked deadlocked, Boadu nudged an inswinging corner past an oblivious Andre Onana to snatch victory.

AZ manager Arne Slot was among those taken by surprise by the winner. ‘You expect almost anything from Myron, but not that he’ll score with his head, let alone from a corner,’ he said.

His Ajax counterpart Erik ten Hag was visibly annoyed at seeing his team lose a third successive match without scoring. ‘This match was a 0-0 game, a real battle. We shouldn’t be giving it away with a set-piece one minute from the end,’ he said.

Ajax’s previous Eredivisie conquerors, Willem II Tilburg, climbed to third by inflicting Heerenveen’s first home defeat of the season. Mike Trésor Ndayishimiye scored the winner in the 43rd minute, rifling home from the edge of the area after pouncing on a scuffed pass by Heerenveen’s Sherel Floranus.

PSV Eindhoven missed the chance to overhaul Willem II as they went down 3-1 to Dick Advocaat’s resurgent Feyenoord. Steven Berghuis opened the scoring with a flashing header after 19 minutes and went on to score two penalties. Gaston Pereiro pulled a late goal back for PSV with a floating chip over Kenneth Vermeer.

Fifth-placed Utrecht came back from 1-0 down at Heracles Almelo to win 3-1 in the second half, with midfielder Bart Ramselaar scoring twice. Orestis Kiomourtzoglou had put the home side ahead five minutes before half-time.

RKC remain rooted to the bottom despite twice taking the lead at Fortuna Sittard. Mark Diemers replied to Hans Mulder’s opener with a superb curling shot. Clint Leemans restored the lead after half an hour but two goals by Vitalie Damascan secured the points for Fortuna.

The other Limburg side, VVV Venlo, slipped into the play-off zone with a 2-1 defeat to fellow strugglers PEC Zwolle. Below them, ADO Den Haag also lost ground as they drew 1-1 at home with Groningen in a match which saw both teams reduced to 10 men.

Emmen ended a run of three straight defeats by beating Sparta 2-0 with a pair of penalties by Sergio Peña and Michael de Leeuw to keep pace with PEC and Fortuna.

An even worse run of form for Vitesse Arnhem ended with a 3-0 win in Enschede that featured two goals by Bryan Linssen. Vitesse’s last league win was on October 19 at VVV.