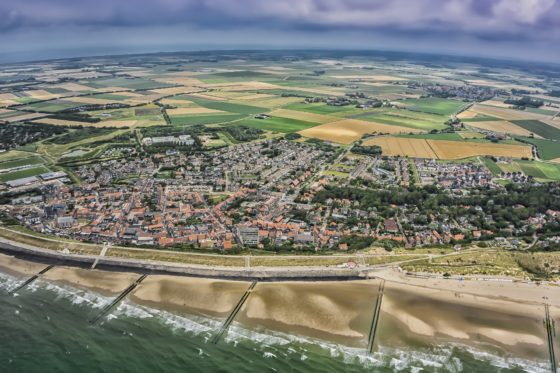 The sweeping dunes of the Frisian Islands, the seaside resorts of Zeeland, and the bustling port of Rotterdam – the largest harbour in Europe, may one day be returned to the sea, say scientists, if climate change cannot be halted.

The highly fertile soil reclaimed from seas or lakes since the 14th century transformed the outline of the Netherlands, and though it makes up just 17% of our land mass, it is now among the most densely populated ground in the country.

Today, almost half of the Netherlands’ 17 million inhabitants live along its 350km coast or in regions which are below sea level. But the country we know today has been artificially held together for centuries by dikes, pumps and polders, and sea levels – now rising at an average of about 3mm a year – risk overwhelming our water defences. If this happens, the government’s Delta Programme estimate that 60% of the country could be flooded.

Subsidence, thought to be as much as 5mm per year in some areas, is happening even faster than sea-level rise in the Netherlands, pushing the country even further below sea level. A temperature rise of 2 degrees and record-breaking summers, has lowered groundwater levels and drained the peat. This not only causes subsidence, but as the peat oxidises, increases our CO2 output.

Why is the sea level rising?

Since industrialisation, gases such as carbon dioxide, methane and nitrous oxide have been released in huge volumes into the atmosphere. These gases have an insulating effect on our planet, trapping heat like a greenhouse. Fossil fuel combustion is by far the biggest culprit, while meat farming accounts for an estimated 14.5% of all global greenhouse emissions.

With so much heat caged within our atmosphere, ice sheets and glaciers are now melting, increasing global sea levels by an average of 7.6cm between 1992 and 2015 (NASA). Less ice means a darker landscape, more prone to absorbing heat, while the thermal expansion caused by the warming of the sea means the water needs ever more space. The chain reaction is hard to halt, and it is easy to see why scientists believe global warming is accelerating and likely to rocket after 2050.

Nature has in-built solutions and the Earth’s dense forests were once its lungs, absorbing carbon to help keep our atmosphere in balance. But widespread deforestation means these natural defences can no longer keep up. Since civilisation began, it is thought that humans have felled almost half of the original tree-count, clearing an area larger than South Africa in the last 30 years alone.

Climate scientist Dewi le Bars is getting used to media requests now that climate change is finally receiving the attention it deserves, especially in a country which risks being so acutely affected.

‘Two years ago, the interest was low,’ he tells me when we meet at the Royal Netherlands Meteorological Institute (KNMI) headquarters in De Bilt, where he is based. ‘I could really feel this different level of discussion between the climate scientists and those outside of the field – there was a big gap. But now it has changed, and you see that climate is discussed in the news.’

Giving the public hard facts about sea level rise, however, is proving difficult. ‘One of the main problems is that we don’t actually know,’ explains Dewi, introducing me to the scientific concept of ‘deep uncertainty’.

‘We know it’s rising, we know it’s going to accelerate, but how much is difficult [to say]. But still there are decisions that need to be made. So that’s why there needs to be a very good discussion between the climate scientists and the engineers, so that when we give a range of the possible futures, they actually understand what we mean by these uncertainties.’

To illustrate this, he flips open his laptop and shows me the Intergovernmental Panel on Climate Change (IPCC)’s latest report, which he helped review. A graph with widely diverging lines projects the sea level rise for 2300 as anything from 80cm to 5m, a range which is heavily dependent on our response to the crisis.

Le Bars, a vegetarian who gets the train to work and says he has felt flygskam (flight shame) for more than a decade, is in no doubt about the need to change the way we live.

‘The whole climate community is very clear about the case for mitigation. It’s not really about adaptation, but really, let’s not do this experiment that we’re doing, which is putting a lot of CO2 in the atmosphere … It’s clear from the IPCC reports that it’s a bad idea and it’s translated already in global agreements like the Paris Agreement, which has really ambitious goals in terms of mitigating climate change.’

Regarding the Netherlands’ future, le Bars is optimistic about the country’s expertise to manage rising water levels due to its strong infrastructure and economy.

‘A lot of countries will suffer much earlier,’ he says. ‘In Miami, sea level rise means more flooding. But in the Netherlands, sea level rise means more cost in protecting the coast.’ Those most at risk, he explains – more doleful now – are not necessarily the lowest countries, but the countries least able to protect themselves from the effects of climate change, such as Bangladesh. 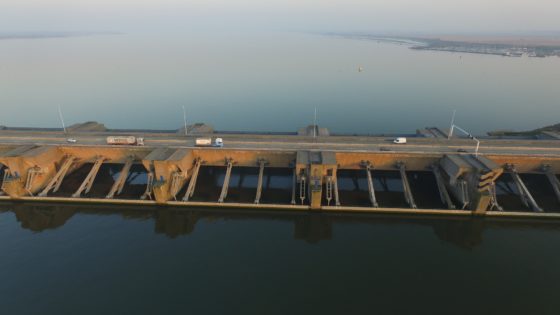 Other academics are less positive about the Netherlands’ future. Writing in the NRC Handelsblad last year, Dr Peter Kuipers Munneke, a polar meteorologist at Utrecht University, said that ‘the question is not if the Netherlands will disappear below sea level, but when?’

‘We don’t know what the tipping point is,’ says Don de Bake, senior advisor for flood defences at the Rijkswaterstaat from 2009-2019. Experts, he explains, consider that the Netherlands can probably cope with a rise of around 1-1.5m in sea level, while 2m or more will require a total rethinking of current defences.

‘We know something is going to happen; we know we need to take action, but we do not know how big the problem is and when it’s going to be very urgent,’ he says. ‘Dealing with uncertainty is something that none of us are very good at, but that’s what we need to do.’

Experts will keep on presenting their data, but it is up to policy makers in The Hague to act on it. ‘The information is all there, now it’s just up to society to take it and make something from it,’ says Le Bars.

This is the first of a two-parter on rising sea levels in the Netherlands. In the second, published on Tuesday, Deborah Nicholls-Lee will examine what the Netherlands is doing in the fight against rising water levels.