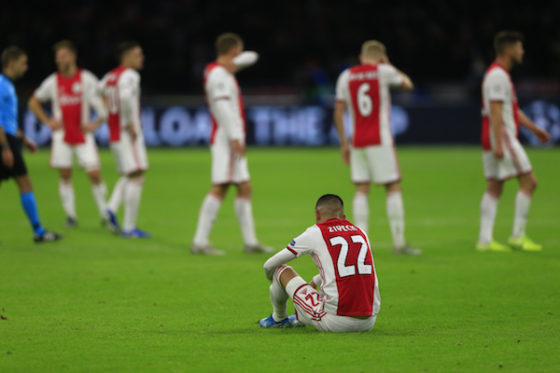 Amsterdam football club Ajax will join AZ of Alkmaar in the knock-out rounds of the Europa League after losing their key Champions League qualifier to Valencia 0-1.

The Amsterdammers had been leading Group H on goal difference, needing just a draw in front of their home crowd in the final game of the group stage. Valencia and Chelsea now move on to the round of 16.

Uefa’s match reporter said the evening was one of ‘intense frustration’ for Ajax. ‘For a team that has charmed the world with mesmerising attacking football, tonight, when it really mattered, they came up short,’ he said.

‘The combinations didn’t click as normal, there was little space to be found among the Valencia back line and as a result, precious few chances were created. Ajax will be bitter to bow out with ten points, but that’s the way it goes sometimes.’

Our journey wasn’t finished yet. But we will continue fighting as a team. ♾#UCL pic.twitter.com/Cvdm6xqZEm

According to the Telegraaf, some 2.4 million people in the Netherlands had tuned in to watch the match. Ajax reached the semi-finals of the Champions League last season and were finalists in the Europa League in the season before.