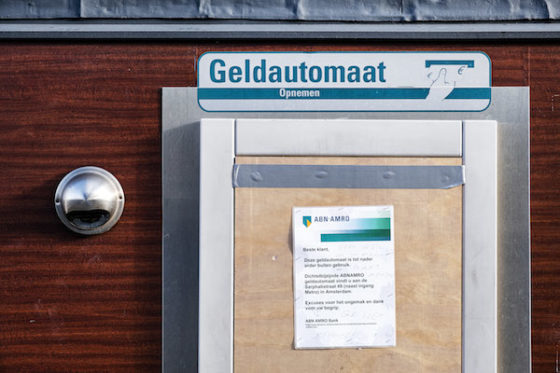 ABN Amro bank has boarded up 470 cashpoint machines – more than half its nationwide total – because they are being targeted by gangs who try to blow them up.

The situation is temporary and will last several weeks if not months, the bank said.

At least 50 ABN Amro ATMs have been blown up this year, usually in shopping centres and close to homes. By contrast ING, with 1,430 ATMs nationwide, Rabobank with 1,887 and SNS with 300, have only been rarely targeted.

The Dutch banks have an agreement to make sure that all consumers have an ATM within at least five kilometres and that rule has not been affected by the closures, ABN Amro said.

Organisations representing the elderly said they understood the reasoning behind the closures but urged the banks to make sure there are enough, easily accessible alternatives.

The number of cash point machines in the Netherlands has gone down by 25% over the past 10 years, while cash withdrawals have shrunk 40%.