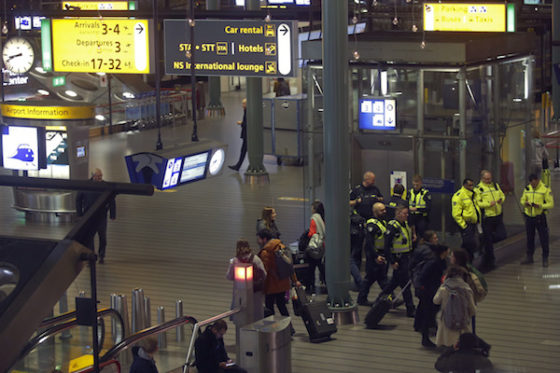 Military police at Schiphol after the scare. Photo: AP Photo/Peter Dejong via HH

The pilot who sparked a security scare at Amsterdam’s Schiphol airport on Wednesday night was giving a trainee instructions when he accidently gave a hijacking alert, airline Air Europa has confirmed.

The pilot activated the hijacking alert code as priority passengers were boarding, putting D pier into lockdown and launching a high-profile military police operation which generated news coverage around the world.

No disciplinary measures will be taken against the pilot because there is nothing to blame him for, the airline told broadcaster NOS.

Meanwhile, one of the 26 passengers on board the plane said they only realised the extent of the scare when they were allowed to leave the aircraft.

‘My family rang when I was in the plane because they heard it had been hijacked,’ Javier Domingo told the Parool. ‘They had seen these messages about people with knives on board but none of it was true. We were just sitting talking. Some people were watching films on their iPad.’

Only on leaving the plane, where they were photographed and searched, did passengers realise what had been going on, he said.

When the passengers were finally let back on board, the pilot was standing in the doorway. ‘He offered every passenger his apologies on behalf of Air Europa,’ Domingo said. ‘But he did not say that it was he himself who had caused it.’