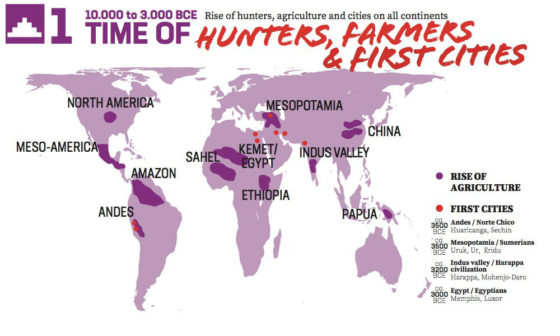 Part of the poster. Courtesy of The Black Archives

History and teaching organisations who believe the Netherlands should modernise and broaden its history teaching have proposed a new look at the curriculum based on an international world view.

The Black Archives, world history commission at the VGN Dutch history teachers’ association, and other experts have come up with a poster representing the globe – and ten history periods taught in Dutch schools – from a ‘less Eurocentric’ viewpoint.

The poster called ‘ten times more history’ has already been distributed in Dutch to hundreds of Amsterdam schools and across the country, and the makers are presenting an English version at a history teaching conference in Leiden on Friday.

For instance, while Europe might have been hunting and gathering from 10,000 to 3,000 BCE (‘before the common era), the Egyptian, Sumerian, Norte Chico and Harappa civilisations were building the first cities. The colonial period is presented as a time of ‘trade, looting and exploitation on a global scale’, tracking the passage of enslaved people, while the modern period is viewed in terms of ‘globalisation and human rights’.

Last month, almost 150 teachers and school directors presented advice to the government proposing a rethink and modernisation of the Dutch school curriculum, while education minister Ingrid van Engelshoven has said there needs to be more attention for the ‘shadowy sides’ of Dutch history – such as its slave trading past – and has asked a commission to suggest rethinking the ‘canon’.

That proposal has generated mixed reactions from historians.

Miguel Heilbron, co-founder of The Black Archives, a collection of books, archives and artefacts representing black and ‘other marginalised’ perspectives on the past, says the aim of the poster is to promote education about world history and hidden perspectives and to stimulate a discussion.

‘You see – not only in the Netherlands – there’s often a dominant perspective, often a “Western” perspective,’ he told DutchNews.nl. ‘This is something we want to confront and challenge. When we only know one perspective, this can be problematic. There are so many others that are relevant to know if you want to understand our society but also the world today.’

He said that there is ‘much room for improvement’ in the current way Dutch history is taught in 10 time periods, and added that the world is also often drawn in a factually incorrect map.

‘One thing we are challenging as well is how the world map is projected,’ he said. ‘The Mercator projection is very often used in the classroom and many people don’t know that this projection enlarges the northern hemisphere. It shows the northern continents as bigger than they are compared to the southern. We use a map showing the continents proportionally.’ 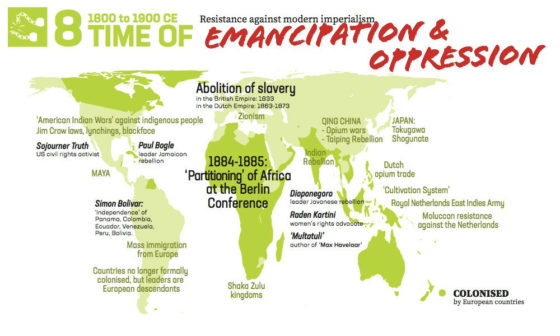 With assistance from internationalisation organisation Nuffic, he said, the poster has been produced in English and is being distributed to bilingual schools in the Netherlands and available via The Black Archives website and at exhibitions.

‘This step is to make it accessible to bilingual schools across the Netherlands,’ said Heilbron. ‘It is also in English so perhaps other audiences or people can use it, or it can generate a broader discussion.’

History teacher and chair of the commission on world history at the VGN Dutch history teachers’ association Marian Heesen is enthusiastic about the poster and a more global perspective.

‘We are with a group of history teachers, a bit unsatisfied with the curriculum and find it too Eurocentric,’ she said. ‘We think that in this time, you shouldn’t just look at ‘your’ history. We try to get pupils to understand about the world in which they live and it is an international one.’

She pointed out that pupils in her class have all kinds of different backgrounds too. ‘We have the whole world in the class, so we have to teach about the whole world,’ she added.