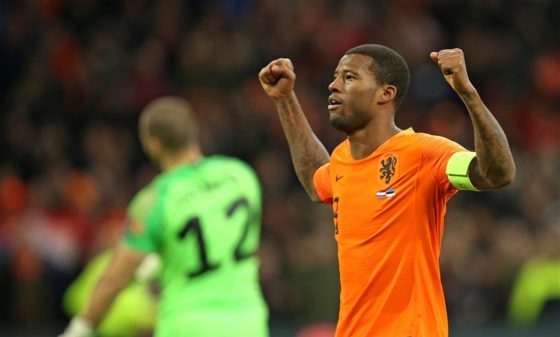 Georginio Wijnaldum scored a hat-trick as the Netherlands cruised to a 5-0 victory over Estonia in their final Euro 2020 qualifying match.

The Liverpool midfielder took his goal tally for the qualifying campaign to eight as the Dutch cruised to victory against the bottom team in the group.

Oranje finished second in Group C to Germany, who came from behind to beat Northern Ireland 6-1, and secured their first appearance in a summer tournament since the 2014 World Cup.

As one of 12 hosts of Euro 2020, the Dutch will play their three group games in  Amsterdam on June 14, 18 and 22. Ukraine will be one of their opponents, while the other two will be drawn in Bucharest on November 30.

It took just six minutes for Wijnaldum to open the scoring as he headed in from close range from Promes’s cross.

Defender Nathan Aké doubled the score from a similar position after 18 minutes. Oranje then struggled to break down Estonia’s resistance until Wijnaldum’s second on 66 minutes after Stengs harried Karol Mets into giving away the ball.

Wijnaldum completed his hat-trick 12 minutes later with a rifling shot into the bottom corner before substitute Myron Boadu crowned his debut by chesting down Kevin Strootman’s pass and firing past the goalkeeper.

Koeman said: ‘The best thing about the evening was that we kept going to the end. The first half wasn’t great, although we worked hard for the first goal and I was proud of that. After the second goal it seemed as if the energy went out of us and we didn’t put our opponents under enough pressure.’

Wijnaldum made headlines at the pre-match press conference on Monday when he called for players to walk off the pitch if they were subjected to racial abuse, in the wake of the chants directed at Excelsior’s Ahmad Mendes Moreira by Den Bosch fans the previous day.

The national team posted a photo on social media ahead of the game showing the players linking hands in a circle to express their solidarity against racism.

Wijnaldum said afterwards he was happy to let his feet do the talking against Estonia. ‘Yesterday was an eye-opener,’ he said. ‘Today I tried to give it my all and I scored three goals, which was great.’

‘People were calling me a hero. I’m not. I just said what a lot of people were feeling, but when you’re a well-known footballer people listen to your voice. Not everyone has the platform I have, but I felt it had to be said. I hope something is done now to stop this in football and in society.’