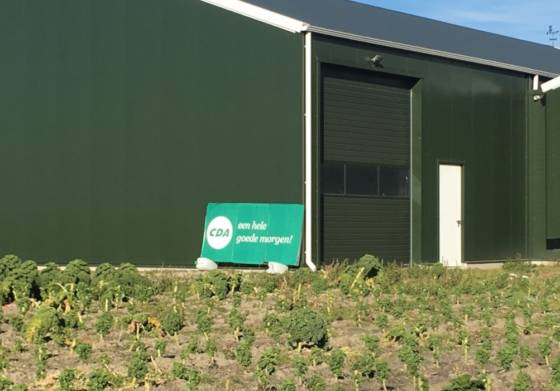 A very good morning from the CDA. Photo: DutchNews.nl

Christian Democratic party members will on Saturday discuss a new course for the party, which, according to a special CDA commission, aims to create a ‘side by side society’.

The current focus on ‘norms and values’ has led to a ‘downturn in decency’ and created a polarised society, the commission says in its report.

‘The Netherlands is becoming massively polarised. We are on opposite sides of the fence, at school, on December 5,’ CDA chairman Rutger Ploum told RTL Nieuws. ‘We need to listen to each other and try to convince each other. We have to do this together.’

The commission says that the Netherlands has become too individualistic, which is leading to an ‘unheard of epidemic of loneliness, depression and burn-outs’. There is, the report says, a gulf between those who can take care of themselves and those who can’t.

The report also suggests that the Netherlands abandon its role as the world’s second biggest exporter of agricultural products. Farmers should instead focus on good quality rather than cheap meat and on reaching local markets.

‘We need to find a new balance,’ commission chairman Leonard Geluk said in the AD. ‘The shift needs to be from profit to value. The focus on farming has been on exports, economies of scale and profit maximisation by the likes of supermarkets. But this has been at the expense of farmers’ income and the environment.’

The CDA, traditionally the party of the Dutch farming community, is currently without a political figurehead following the resignation of right-winger Sybrand Buma, who has become mayor of Leeuwarden.

The new leader will lead the CDA into the 2021 general election. The CDA has 19 seats in the current parliament and has been part of the ruling coalition in nearly every government since it was formed in 1977 by the merger of three smaller Christian parties.