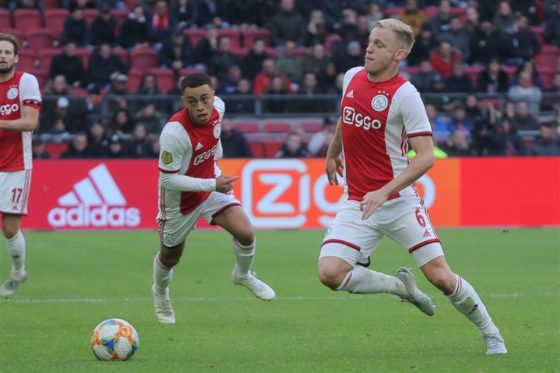 After their dramatic 4-4 draw at Chelsea in midweek, it was business as usual for Ajax in the Eredivisie as they brushed aside fourth-placed Utrecht in Amsterdam.

Erik ten Hag’s side scored four goals for the fourth game in a row, cruising to a 3-0 lead in the first half with two strikes by Donny van de Beek and one from Dusan Tadic. Defender Lisandro Martinez completed the scoring on 66 minutes.

AZ are now clear in second place, six points behind Ajax, after an equally comfortable 3-0 win against Emmen. Teun Koopmeiners opened the scoring with a 36th-minute penalty, with the other goals coming from Myron Boadu and Calvin Stengs, who could both make their debuts for Oranje next week.

PSV continue to struggle in the absence of Donyell Malen and Steven Bergwijn, going down 2-1 to Brabant neighbours Willem II in Tilburg. Manager Mark van Bommel dropped goalkeeper Jeroen Zoet for the first time in six years in favour of Lars Unnerstall, but Che Nunnely’s first two goals for Willem II consigned PSV to their fourth defeat in six matches.

Manager Mark van Bommel said his team’s loss of form was ‘explicable’. ‘It’s not easy when you have a young team and your two best players are missing.’ He acknowledged that Zoet was ‘deeply disappointed’ at losing his first-team place, but explained: ‘I made the decision to play Lars because Jeroen had made a number of mistakes.’

Bottom club RKC Waalwijk threatened to cause a sensation as they went 2-0 up inside 20 minutes at Feyenoord. But Dick Advocaat’s side levelled before half-time through Nicolai Jørgensen and Sam Larsson, before defender Marcos Senesi completed the comeback with a close-range header five minutes from time.

Willem II’s win lifts them to sixth place, just two points behind PSV and a point behind Utrecht and Vitesse Arnhem. The latter lost their third straight league game at home to Groningen, for whom Joel Asoro bagged two first-half goals.

Amadou Ciss’s fifth league goal was enough to earn Fortuna SIttard the points in the basement battle against ADO Den Haag, bringing relief after Sittard’s 6-0 loss to Utrecht a week ago.

VVV Venlo’s collapse shows no sign of abating after they went down 6-1 at Heracles, their sixth straight loss. Cyril Dessers scored three and set up goals for Alexander Merkel and Mauro Junior, while Peter van Ooijen’s free-kick for VVV came when they were already 5-0 down.

Twente’s win over PEC Zwolle lifted the newly promoted club to 11th place thanks to first-half goals from Haris Vukcic and Joel Latibeaudiere, while Reza Ghoochannejhad’s 61st-minute header was not enough to save PEC from their sixth defeat in seven games.

Heerenveen won by the same scoreline against Sparta, but had to do it the hard way after going behind to Lars Veldwijk’s header on 26 minutes. Veldwijk had chances to seal the game but it was the Frisians who prevailed thanks to two surgical strikes from Chidera Ejuke in the last 20 minutes.