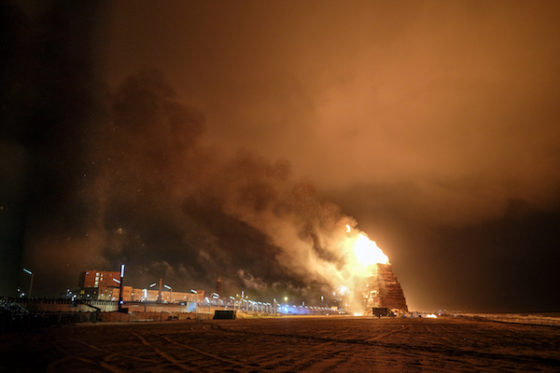 The fire sent a cinder storm over the town. Photo: Eric Brinkhorst via HH

The Dutch safety board has slammed The Hague city council for ignoring its own rules ahead of last year’s New Year bonfire on the beach, which caused millions of euros worth of damage.

The traditional New Year beach fire at Scheveningen had to be put out by the fire brigade after huge clouds of cinders were blown across the town and nearby dune area, sparking lots of small fires and damaging cars and roofs.

Several buildings had to be kept permanently wet to head off the risk of fire and people were forced to take shelter to avoid the blaze.

It later transpired that the bonfire – which towered 48 metres above the beach – was 13 metres higher than permitted, yet officials did not intervene and stop the blaze.

The safety board report makes clear that officials knew the builders had broken the rules but did nothing. The city, the report said, had taken unacceptable risks to keep the peace with the bonfire builders

Sources close to mayor Pauline Krikke said at the time officials decided not to get involved to head off ‘social unrest’.

The Hague said in a reaction that it fully accepted the findings of the report and would take steps to ensure nothing like it happened again. This year’s fire will be subject to strict safety rules and the builders will have to apply for a permit.

‘I am going to ensure that we celebrate a festive and safe New Year, which includes bonfires,’ Krikke said. ‘But it will smaller scale, more limited and done safely.’

Scheveningen and the nearby district Duindorp have had a competition to build the highest bonfire since the early 1990s. This year, the strong sea wind blasted the flames from the Scheveningen fire across the beach to the boulevard, sending showers of sparks across the town.

Footage of the fire, including tornadoes made of flames, were broadcast around the world.

The city council, currently without a formal coalition following a corruption scandal, will debate the report next week.