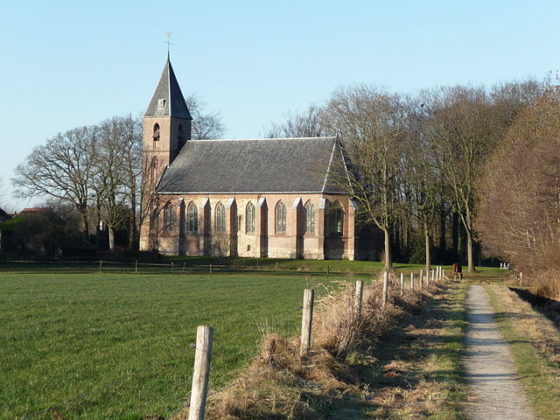 The church in Ruinerwold. Photo: Kiwi91 via Wikimedia Commons

Police in Drenthe have found a man and six adult children aged 16 to 25 living in the cellar of an isolated farmhouse ‘waiting for the end of time’, broadcaster RTV Drenthe said on Tuesday.

The family were discovered after the oldest son turned up at a bar in the nearby village of Ruinerwold several times. ‘He came in again on Sunday and was very confused,’ cafe owner Chris Westerbeek told the broadcaster.

‘He ordered five beers and drank them. Then I had a chat with him and he told me he had run away and needed help. Then we called the police.’

The man, with old clothes and long hair and beard, told Westerbeek he had not been outside for nine years. ‘He said he had brothers and sisters who lived in the farm. He said he was the oldest and wanted to end the way they were living.’

Police went to the farmhouse and found a secret flight of stairs in the sitting room hidden behind a cupboard which led to the family’s hiding place. The father, 58, was in bed, having had a stroke several years ago, the broadcaster said.

It is unclear how long the family had been living in the cellar or what had happened to the children’s mother. The children had no contact with the outside world and lived completely self-sufficiently with their own vegetable garden and a goat.

No neighbours reported knowing the family and one neighbour told RTV Drenthe he thought the man, who had boarded up all the farm windows, lived there alone.

The police have confirmed finding the family and said the investigation is continuing. The man – police would not confirm the relationship between the seven people – was not cooperating with the inquiries and was arrested.

The village of Ruinerwold lies some six kilometres from Meppel and has a population of just under 4,000 people.

Ruinerwold mayor Roger de Groot told a press conference on Wednesday afternoon that the children’s mother appeared to have died several years earlier. He also said there is doubt about whether the man, said by some neighbours to be Austrian, actually was the young adult’s father.

He also said he was unaware of reports by some neighbours that police had been called to the property several times.