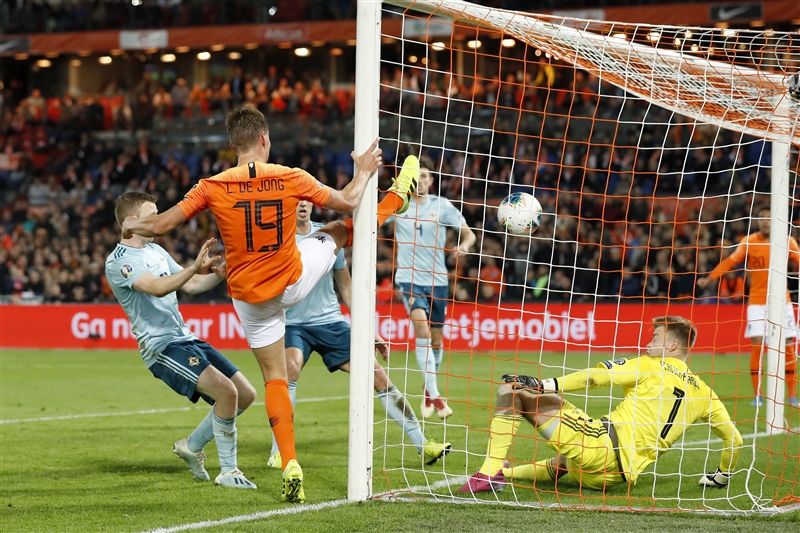 Oranje took a big step towards qualifying for next year’s European football championships, but only after surviving a major scare against Northern Ireland.

The Dutch struggled to break down a stubborn Northern Irish defence in a first half of few chances in Rotterdam, with Georginio Wijnaldum coming closest to breaking the deadlock with a header.

The second half offered more of the same stodgy fare until the visitors turned the game on its head by taking the lead in the 74th minute. Matthijs de Ligt made a hash of clearing the ball in his own penalty area and when the cross came back, Josh Magennis outjumped the Juventus defender to head past Jasper Cillessen.

The goal galvanised the sluggish Dutch forwards and within five minutes Memphis Depay equalised with a deft side-footed shot. Northern Ireland looked set to hold out until substitute Luuk de Jong scored an unconventional winner. The Sevilla striker sliced the ball into the air with a miscued shot before poking the loose ball into the net from half a yard while holding the post for balance.

Depay added a third goal later in injury time after Frenkie de Jong cut through the tiring defence to give the scoreline a flattering gloss.

National team coach Ronald Koeman admitted the match had been short on quality but his players had been the better team.

‘We hoped for something better in the first half, but they did a perfect job within their abilities. They didn’t come to play football; they played into the corners and applied pressure.

‘They took a long time over free-kicks and goal-kicks. I think the referee waited much too long to take action. But we were a bit sloppy. We often had a man over, but it was too slow and that made it difficult.

‘When it was 0-0 I thought we’d score and maybe get a second, because as it opened up we started running through them, but once we went behind I thought it was going to be one of those evenings when it went against us.’

The result propels the Dutch to the top of Group C for the first time in the campaign, based on head-to-head results against Germany. Their next match is on Sunday away to Belarus.