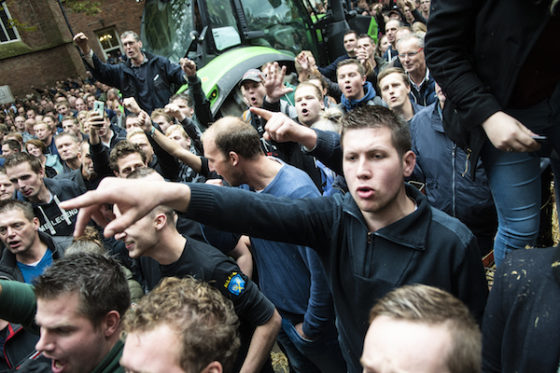 Farmer’s lobby group LTO Noord has told website Nu.nl that it will not suspend the farmers involved in a couple of violent incidents during Monday’s protests about nitrogen-based pollution.

Convoys of tractors had converged on eight provincial government buildings on Monday in a coordinated protest about new limits imposed on farmers while national government decides how to tackle the problem.

In Groningen, farmers used a tractor to break down the door to the provincial council offices. In a second, a tractor drove through a metal barrier, sending fencing into the air which narrowly missed several cyclists.

While condemning the violence, spokeswoman Trienke Elshof told the website that dealing with the troublemakers was ‘up to the police’. LTO Noord is part of LTO Nederland, which represents the interests of some 35,000 farmers.

Farmers protesting in Groningen and elsewhere in Netherlands against proposals to bring down nitrogen (greenhouse gas) emissions by reducing livestock numbers.

They were in Den Haag two weeks ago. Aimed at provincial governments today. pic.twitter.com/DegfimUGlV

Following Monday’s protests, three provinces overturned their regulations to curb nitrogen-based pollution, imposed in the wake of a Council of State ruling which said the Netherlands is not doing enough to combat the impact of nitrous oxide and ammonia.

Farming is said to be responsible for 41% to 46% of nitrogen-based emissions.

Drenthe, Overijssel and Gelderland all said they would scrap the rules. Friesland decided on Friday to withdraw its regulations following a similar protest.

The violence was condemned by MPs and commentators said the decision by the four councils to change their rules in the wake of the demonstrations had not gone down well in The Hague.

‘You rarely see in the Netherlands that demonstrators are given in to so quickly,’ Jan Brouwer, director of the public order and safety institute. ‘Dropping plans following opposition from one side is a new development, and not a sensible one.’