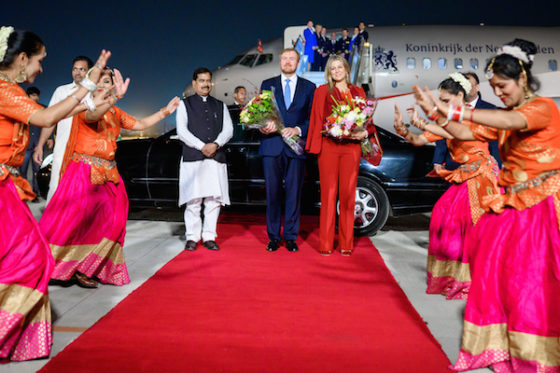 King Willem-Alexander and queen Maxima have begun a five-day state visit to India after touching down in New Delhi on Monday to a welcome by president Ram Nath Kovind and prime minister Narendra Modi.

The state visit is the 19th undertaken by the king and his second official trip to India. In 2007, Willem-Alexander and Maxima accompanied his mother Beatrix to the country while she was still queen.

Dutch trade minister Sigrid Kaag, health minister Bruno Bruins and junior economic affairs minister Mona Keijzer are part of the accompanying trade mission, made up of some 122 different companies. That is in stark contrast to 2007, when just eight companies made the trip, broadcaster NOS said.

On Monday, the royal couple will be in New Delhi where they will attend a state banquet and a technology summit, where the king will give a speech.

On Wednesday, Mumbai is on the agenda and on Thursday and Friday the group will travel to the southern state of Kerala.

The Netherlands has a growing Indian population and trade links between the two countries stretch back 400 years, to the days of the VOC.