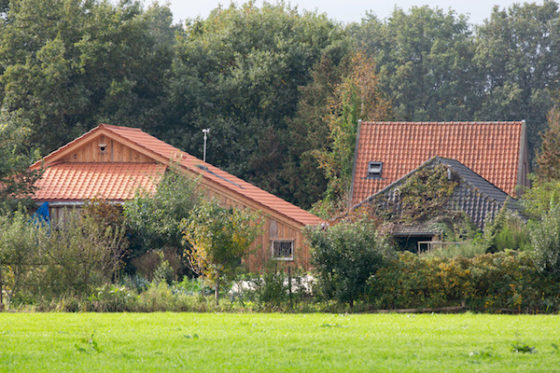 The farmhouse where the family was found. Photo Herman Engbers via HH

The man arrested in the Drenthe farm family mystery is an Austrian national known as Josef B, the Telegraaf and AD said on Tuesday evening.

The papers described the man, 58, as a wood-worker and an odd-jobs man. He had a small workshop on an industrial estate in Meppel, a small town just six kilometres away, and believed in the ‘creative use of wood’, the Telegraaf said.

Why the family had spent nine years living in a small space in the farm B rented on the edge of the village of Ruinersvold remains a mystery.

The police have made clear that five young adults and their father were living on the isolated farm near a village of 4,000 people, but their relationship to each other and to B is still unclear.

‘Some neighbours talk of a sect, others thought that drugs were involved, but then they shrugged their shoulders and went on with their lives in the rustic village of Ruinerwold,’ the Telegraaf said.

The children were aged between 18 and 25, police confirmed. They and their father lived in a ‘small space which could be closed off’ but not a cellar as earlier reported. ‘It is unclear if they remained there voluntarily’ the police statement said.

Police were alerted this weekend by the barman of a local cafe, who was concerned about the disheveled state of a young man who came in and said he needed help.

‘The police assessed the situation and found a number of rooms with makeshift furnishings where the family lived a withdrawn existence. That is where the six were found,’ Ruinerwold mayor Roger de Groot told a press conference.

According to some reports, the young adults had no contact with the outside world and lived completely self-sufficiently with their own vegetable garden and a goat. Reports that they were awaiting the ‘end of time’ have not been substantiated.

None of the family were registered with the authorities, police said.

Locals said they saw the man thought to be Josef B driving around in an old car but had not seen anyone else.

‘He was very sharp,’ the neighbour said. ‘You only had to come close to the property and he would send you away. He used binoculars to keep an eye on everything.’

Landlady Alida ten Oever (66) told the paper that B always paid the rent promptly and that she had never noticed the presence of other people on the property. ‘We are quite perplexed about it all,’ she told the paper.