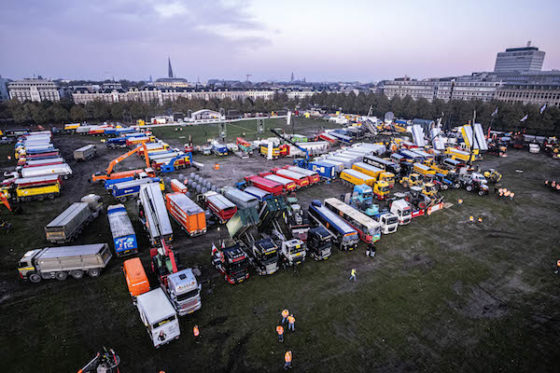 By dawn, the Malieveld was already filling up. Photo: Ramon van Flymen / Hollandse-Hoogte

There were long delays on roads heading to The Hague on Wednesday morning as thousands of construction workers massed on the Malieveld outside parliament to protest at the government’s measures for combatting nitrogen and PFAS-based pollution.

By 8.30, police said the Malieveld was full and they closed the A12 exit to stop more vehicles attempting to join the protest.

The demonstration was called by the construction industry, which says thousands of building projects have been crippled by a recent Council of State ruling, stating more needed to be done to combat nitrogen-based pollution.

In addition, the compensation scheme set up to head off the impact of nitrogen-based pollution was ineffective, the country’s highest administrative court said.

Last week, central The Hague was almost brought to a standstill by thousands of protesting farmers, who fear they will bear the brunt of efforts to reduce nitrous oxide and ammonia emissions.

Ministers have pledged to come up with a new package of measures by December 1 so building work can resume on some projects.

Farm minister Carola Schouten told the Telegraaf on Wednesday that the cabinet aims to make sure smaller construction projects can restart, as long as developers agree to compensate for extra emissions.

And on Tuesday, it emerged that the tough rules for dumping soil and sludge polluted by PFAS, a toxic chemical, may also be relaxed. The government has asked the public health institute RIVM to come up with new limits.

‘We are working hard,’ Schouten said. ‘The Netherlands should not be brought to a standstill and the cabinet has agreed that the house building programme will be the first to be put right.’

The coalition parties in parliament have also said they will back a programme to allow building workers who have no work on because of the crisis to claim part-time unemployment benefits.