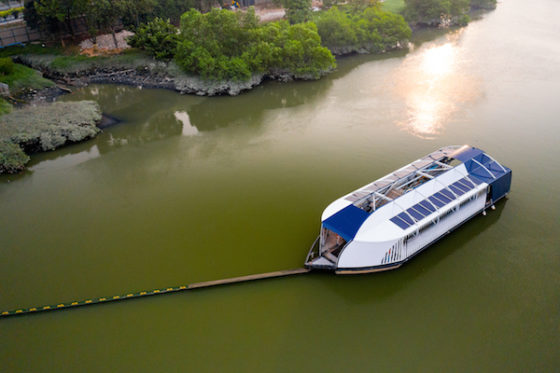 The Interceptor at work in Malaysia. Photo: The Ocean CleanUp

Dutch eco-entrepreneur Boyan Slat unveiled a device designed to scoop plastic out of rivers in Rotterdam at the weekend.

Slat, head of The Ocean Cleanup project, spent four years with his team developing the device, known as the Interceptor. He said it will be able to remove at least 50,000 kilos of plastic a day before it reaches the ocean.

Two of the machines are already operational, one in Jakarta, Indonesia and one in Kuala Lumpur, Malaysia.

The plastic is guided into dumpsters located inside the machine by means of a conveyor belt. When full the machine, which currently costs €700,000, sends a signal to the operator to come and empty it.

It’s been four long years, but we now have a method to stop plastic at the source. Big thanks to the team for making this dream a reality! https://t.co/KoxYwetSpI pic.twitter.com/oiD4YepHXX

In an interview with the Volkskrant Slat said he was still developing technology to tackle plastic pollution in the ocean. He is currently testing an improved version of a device to clean up the Pacific Ocean between Hawaii and California.

‘Both projects will be important,’ he said. ‘The plastic that is floating in the oceans is becoming more harmful because it gradually breaks up into micro plastics. In order to avoid that we have to keep the clean-up process going.’

Slat also replied to critics such as American biologist Rebecca Helm, who has said his ocean plastic catcher is harmful to sea life because it hauls in sea animals.

‘The criticism always comes from the same group of people,’ said Slat. ‘It’s the people who said we wouldn’t catch plastic. Now they have a new gripe.

‘We contacted Helm to find out if there was something to be learned about the effects of our system on neuston (organisms, like jellyfish or water spiders, that live on top or on the underside of the surface), but there wasn’t. The impact of our system isn’t nil but it is many times smaller than that of the thousands of ships crossing the oceans. But we are open to any feedback.’

When asked if his ambitions make him vulnerable to criticism, Slat said ‘some goals will be met, others not’.

‘If we now think we can clean up a thousand rivers in five years’ time why shouldn’t I say that?’ he said. ‘There is a chance it won’t happen but seeing how urgent the problem is it’s important to at least try.’