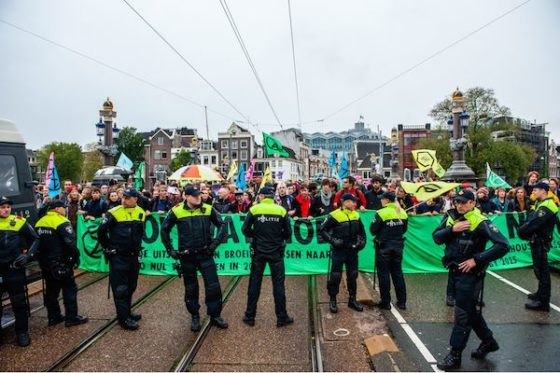 Police arrested 130 climate activists in Amsterdam on Saturday after they blocked the Blauwbrug bridge for several hours, disrupting road and water traffic and some tram services.

An estimated 250 other Extinction Rebellion activists were put into police buses and driven to the outskirts of the city, where they were left, local broadcaster NH Nieuws reported.

All those arrested face automatic fines of €380.

‘Hey hoo, take me by the hand’, arrested Dutch rebels #ExtinctionRebellion singing from within the police facility in Amsterdam Zuidoost. If there is no hope the governments take the #ecocrisis and #ClimateCrisis serious, then we have to disrupt the system. We have to. Face it. pic.twitter.com/KXS4zHbOtS

The group have been campaigning all week in the Dutch capital, starting with a blockade of the Stadhouderskade by the Rijksmuseum on Monday, when 80 people were picked up.