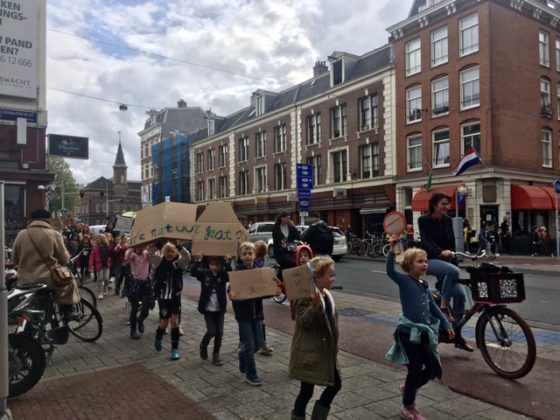 Children on their way to climate march Photo: DN

Tens of thousands of people marched for action against climate change in The Hague on Friday, causing the police to warn of overcrowding on public transport.

Five groups which had organised the initiative said it exceeded all of their expectations. The estimated numbers ranged from 20,000 to 30,000 although there were no official figures.

‘The turn out is completely above what we expected – it’s massive,’ a spokesperson told NU.nl.

So many people turned up that some were already having to leave before the planned start at just before 2pm, and speeches and music were moved to a different, larger location, the Malieveld.

The march was part of a series of global demonstrations demanding that world leaders take more action on climate change, around a UN Climate Change Summit in New York. Schoolgirl activist Greta Thunberg, who gained international attention for her school strike demanding political action, shared an image from The Hague demonstration  on her Twitter feed.

The demonstrators were mainly young people and children.