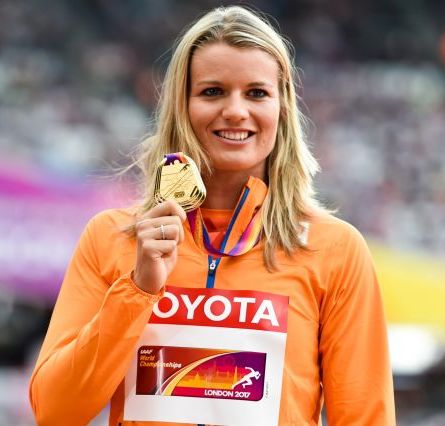 Schippers won the title for the second time in London in 2017. Photo: Erik van Leeuwen via Wikipedia

Dafne Schippers will not defend her 200 metre title at the world athletics championships in Doha after picking up up an injury in the shorter sprint on Sunday.

The 27-year-old from Utrecht withdrew from the 100m final on Sunday night after straining an adductor muscle in the semi-final. Schippers qualified as one of the two fastest losers in a time of 11.07 seconds.

‘After 10 metres she felt a twinge in her groin,’ said coach Bart Bennema. ‘She couldn’t stretch the muscle between 20 and 40 metres.

‘After the race she came over to me on the track together with the doctor and said straight away: “I hope I can run”. But she couldn’t. The risk of an injury was too great.’

Bennema said Schippers would decide whether to contest Monday afternoon’s heats during the warming-up. She took the athletes’ bus to the stadium but it emerged about an hour before she was due to line up that she was unable to run.

Schippers won the 200m title for the first time in Beijing in 2015 and successfully defended it in London two years later. She also won silver and bronze respectively in the 100m. This season her form has been hampered by a back injury.

Earlier on Sunday Sifan Hassan picked up her gold medal after her imperious performance in the 10,000 metres. Hassan has stil not announced whether she will compete in the 1500m or the 5000m later in the week, as the timetable does not allow her to run both.