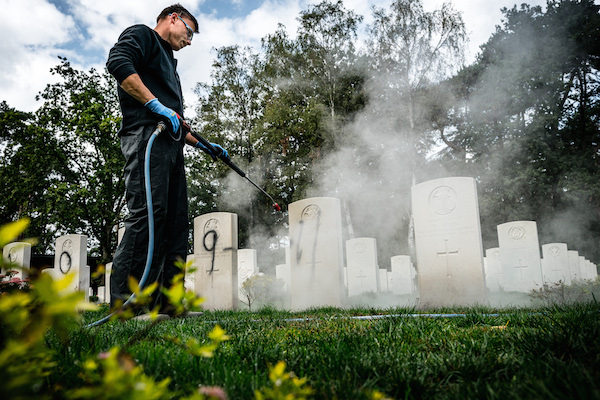 Police in Brabant have arrested a 36-year-old man for vandalising graves and a monument at a cemetery in Mierlo in Brabant, where 664 British soldiers and one Dutch soldier are buried.

Dozens of gravestones, a wall and the chapel were daubed with paint on Thursday night and workers have been working all weekend to try to remove it.  They aim to complete the clean-up by Tuesday when the cemetery will host an event marking 75 years since the area was liberated.

The man arrested at the weekend is said to be from Mierlo itself and, according to Dutch media, has had contact with the police before. According to some reports, he has a history of psychiatric problems.

Hundreds of allied soldiers died in eastern Brabant on September 17 1944 as part of that campaign to liberate the Netherlands.

The Commonwealth Graves Commission said it is appalled by the vandalism and that is working to put the damage right today. ‘We are also liaising closely with local police to try and prevent any further damage to the site,’ the organisation said.

CWGC is appalled to learn that further vandalism has occurred at Mierlo War Cemetery, the final resting place of 664 Commonwealth soldiers and one Dutch soldier from #WW2. Read more: https://t.co/CNeSfHlbwE pic.twitter.com/PKWoUS7FYC