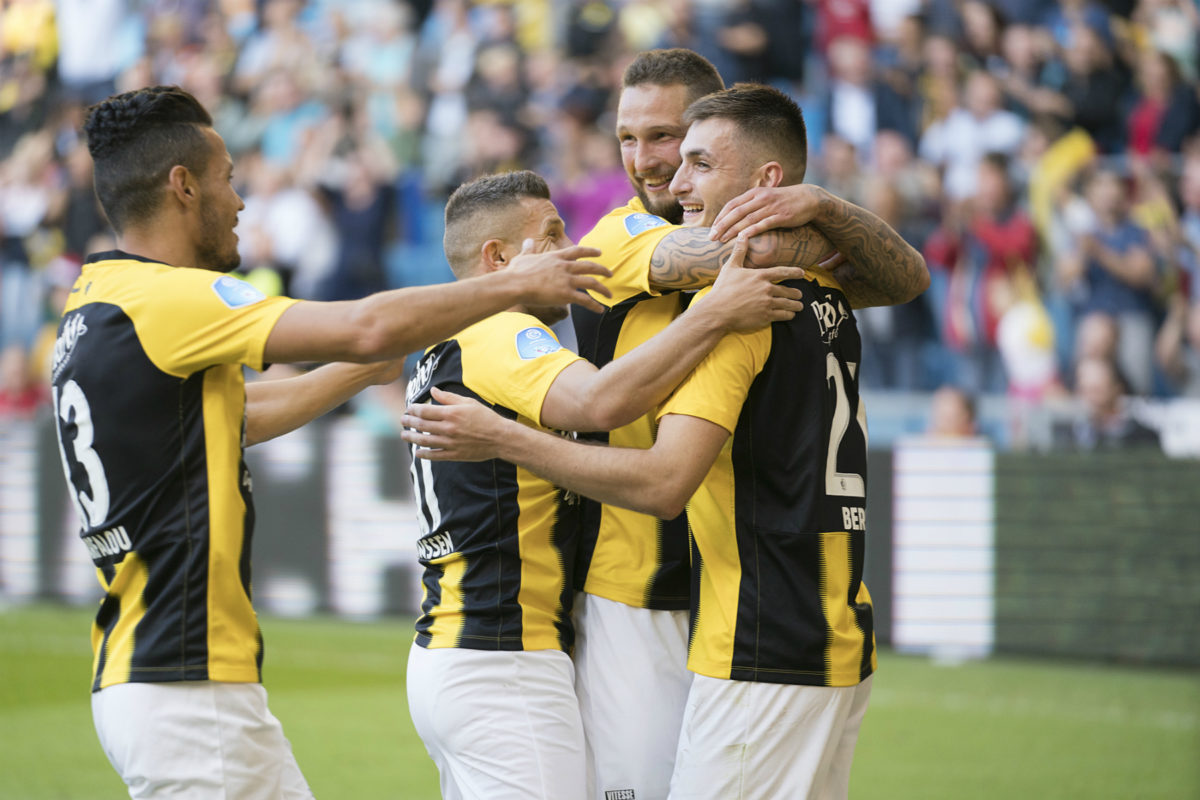 Vitesse Arnhem are the new leaders of the Eredivisie after they inflicted AZ Alkmaar’s first defeat of the season with a stoppage-time penalty.

Substitute Oussama Darfalou looked to have won the match with his first touch when he tapped the ball in after Marco Bizot had parried Matus Beto’s spot-kick. But the VAR panel spotted Darfalou encroaching in the area and Dennis Higler ordered Beto to retake the penalty, which he scored.

Beto revealed afterwards that Bizot had engaged in some psychological warfare between the two kicks. ‘The goalkeeper told me to shoot the same way, so I shot the same way and he dived to the other side,’ he said. ‘I was a bit lucky, but a goal is a goal.’

Ajax and PSV share second place, a point behind Vitesse, having played a game fewer. The next round of matches begins on September 13 after the international break.

The Amsterdammers proved too strong for Sparta, who held out for 25 minutes but then conceded two quick goals to new signing Quincy Promes and Hakim Ziyech. A Dusan Tadic penalty and Ziyech’s second on the hour mark wrapped up a comfortable win before Halil Dervisoglu scored a late consolation.

PSV, meanwhile, survived a scare at bottom-placed RKC Waalwijk, who went ahead just before half-time when defender Melle Meulensteen tapped in from close range. An own goal by Paul Quasten on 65 minutes levelled the scores before summer signings Timo Baumgartl and Konstantinos Mitroglou sealed the points with their first Eredivisie goals for PSV.

Twente Enschede continued their bright start to the season with an impressive 3-1 home win against Utrecht. Aitor Cantalapiedra scored twice from the penalty spot, but the decisive goal came from Haris Vukcic on 68 minutes, shortly after Adrian Dalmau had scuffed in an equaliser.

Another penalty was enough to give Feyenoord the points against Willem II, who started the weekend as league leaders. The Tilburgers kept Feyenoord at bay until the 74th minute, when Justin Ogenia clumsily brought down Luis Sinisterra and Steven Berghuis scored from the spot to give new Feyenoord coach Jaap Stam his first win.

ADO Den Haag and Heracles bagged their first wins of the season, the former edging out VVV Venlo through defender Shaquille Pinas’s first goal for the club just before half-time. Heracles won 2-1 in Groningen as Lennart Czyborra’s spectacular long-range strike on 62 minutes proved to be the difference in an otherwise forgettable match.

Emmen share bottom place with RKC as they went down 3-1 at home to PEC Zwolle, who claimed their first win of the season. Nick Bakker put Emmen ahead after just six minutes, but defensive lapses cost Dick Lukkien’s team dear as Dennis Johnsen, Thomas Bruns and Iliass Bel Hassani turned the game around before half-time.

Heerenveen shared the points with Fortuna Sittard as Danish striker Jens Odgaard opened his account for the Friesland side with a penalty after Felix Passlack had put the visitors ahead.