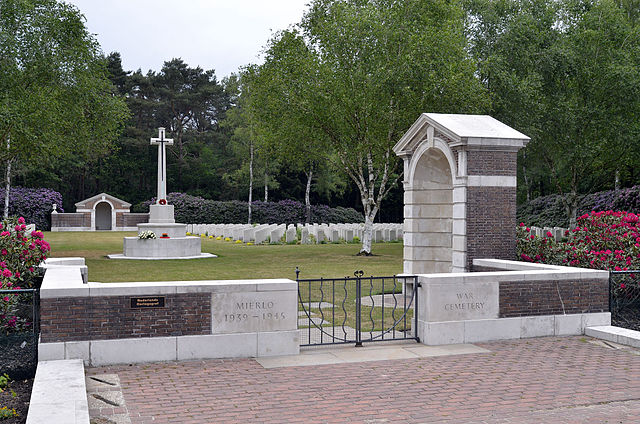 The cemetery without the graffiti. Photo: Wammes Waggel via Wikimedia Commons

Vandals have defaced hundreds of graves and the war memorial at a cemetery in Mierlo in Brabant, where 664 British soldiers and one Dutch soldier are buried.

What some of the grafitti says is unclear, but the reporter described it as ‘English gibberish’. One text reads ‘UK + Ned blood sing’. Words sprayed on the central war memorial include ‘UK boss’, ‘connect head’ and ‘wifi’. One text on the back of gravestones reads ‘false flag’. ‘MH17 lie’ has been sprayed on a wall.

One local who came to look at the damage told broadcaster NOS: ‘My heart is weeping. There are 17 and 18-year-old boys here who liberated us.’

On Monday the graveyard is due to host a ceremony to mark operation Market Garden. Hundreds of soldiers died in eastern Brabant on September 17 1944 as part of that campaign to liberate the Netherlands.

The Commonwealth Graves Commission said it is appalled by the vandalism and that is working to put the damage right today. ‘We are also liaising closely with local police to try and prevent any further damage to the site,’ the organisation said.

CWGC is appalled to learn that further vandalism has occurred at Mierlo War Cemetery, the final resting place of 664 Commonwealth soldiers and one Dutch soldier from #WW2. Read more: https://t.co/CNeSfHlbwE pic.twitter.com/PKWoUS7FYC

The police are appealing for witnesses. According to some reports, the graveyard was also vandalised earlier this week.