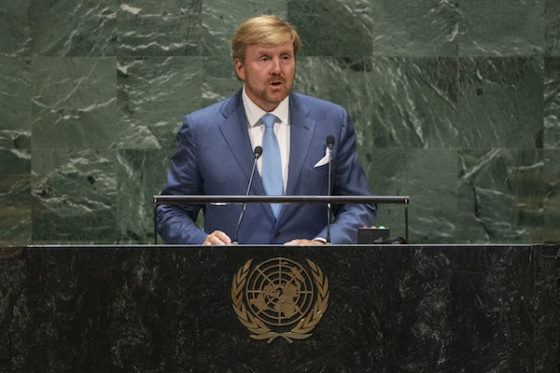 King Willem-Alexander told his audience at the United Nations general assembly on Tuesday evening that everyone – including Russia – must cooperate with efforts to find out the truth about the downing of flight MH17.

It is ‘unacceptable for individuals responsible for international crimes to escape their just punishment’, the king said in his speech.

‘In this forum I wish to repeat that, under Security Council resolution 2166, all countries – including Russia – must cooperate fully with efforts to establish the truth about the downing of flight MH17 on 17 July 2014.’

‘The families of the 298 victims,’ the king said, ‘expect justice, and we will not rest until justice is done.’

Russia has repeatedly denied any responsibility for the downing of the aircraft over eastern Ukraine. And earlier this month, it emerged that a potential key witness had been returned to Russia by Ukraine in a prisoner exchange.

The Netherlands will also continue its efforts to strengthen the International Criminal Court, an indispensable component of the international legal order, the king said.

The bulk of the king’s speech centred on the UN’s sustainable development goals which, he said, will bring the ‘fair, clean and sustainable world’ demanded by young people closer.

‘In many places around the world people are not free to be themselves,’ the king said. ‘In many places, there is no room for diversity. No respect for the rights and opportunities of minorities. No equality between men and women.’

This, the king said, is a breeding ground for instability because every human being strives for recognition.

‘We must hold firmly to the freedom of religion or belief, including for minorities in places where the great majority profess a different faith,’ the king said. ‘Christians, Muslims, Hindus, Jews and people without religious convictions should be able everywhere to follow their own conscience in peace.’

At the same time, he said, the Netherlands welcomes the fact that the rights of lesbian, gay and transgender people, and of other minority communities, are being laid down in law in more and more places around the world.