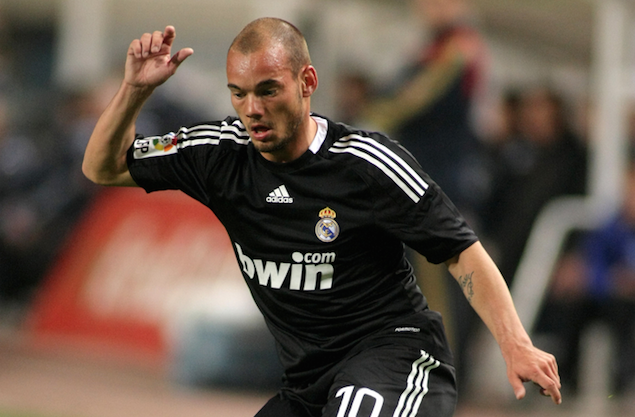 Former Dutch international Wesley Sneijder has announced his retirement from professional football after a 17-year career filled with trophies.

Sneijder, 35, said in Utrecht on Monday evening he had decided to call it quits. He made the announcement on the FC Utrecht tv channel when talking about his decision to rent a skybox at the Galgenwaard stadium.

‘I have a major attachment to the city,’ he said. ‘Now I have stopped playing, I want to have a good place to share my memories.’

Sneijder, who comes from Utrecht, has been without a club since the summer and stood down as an international in September 2018 after a record-breaking 134 caps for Oranje.

He is the third of the Dutch greats after Robin van Persie and Arjen Robben to announce his retirement from the game this year.

Three Dutch greats have hung up their boots this summer.

Sneijder made his debut for the Dutch national team in a friendly match against Portugal in April 2003, less than two months after breaking into Ajax’s first team as an 18-year-old.

What a player, what a career 👏pic.twitter.com/2qhk7fpAEY

His real breakthrough came in November that year when he masterminded a 6-0 win against Scotland in the second leg of the play-offs for Euro 2004, after the Netherlands had lost the first leg 1-0.

Sneijder was the linchpin of the team that reached the 2010 World Cup final, scoring five goals from midfield to become the tournament’s joint top scorer. Four years later he won his 100th international cap as the Dutch shocked world champions Spain in their opening World Cup match, winning 5-1 on their way to the semi-finals.

As an Ajax player Sneijder won the league title in his debut season and the KNVB Cup twice before being sold for €27 million to Real Madrid in 2007. Two years later he joined Inter Milan, where he was instrumental in winning the treble of league, cup and Champions League in the 2009-10 season.

He later spent five years at Turkish club Galatasaray before buying himself out of his contract in July last year and moving to Qatar.