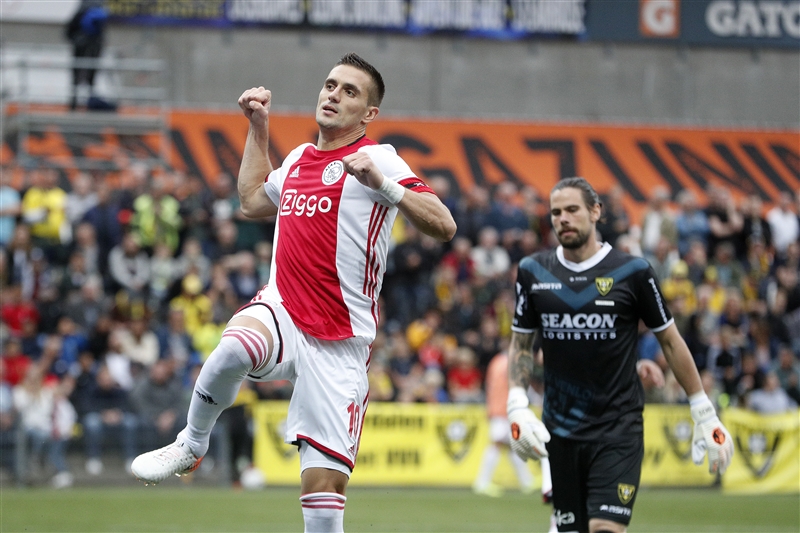 Ajax are top of the Eredivisie on goal difference after Utrecht and AZ Alkmaar both dropped their first points of the season at the weekend.

The Amsterdammers head a group of six clubs on seven points following a 4-1 away win over VVV Venlo.

It took until the 44th minute for Hakim Ziyech to open the scoring, but a Dusan Tadic penalty – the fourth awarded to Ajax in the space of a week – and strikes by Klaas-Jan Huntelaar and David Neres sealed a comfortable victory. Evert Linthorst netted a late consolation for the home side.

Utrecht took an early lead against Feyenoord in De Kuip when Issah Abbass ran half the length of the field before slotting the ball past Kenneth Vermeer. Ridgeciano Haps levelled the scores six minutes after half-time, but neither side could manage a second, leaving Feyenoord manager Jaap Stam still seeking his first win.

AZ kept a clean sheet for the third game in a row, but were unable to find a way past Groningen’s defence as the teams played out a goalless draw at ADO’s Cars Jeans Stadium. Calvin Stengs went close for the hosts with a 20-metre shot, while substitute Mo El Hankouri missed Groningen’s best chance.

The early season’s surprise packages Sparta are also among the table-toppers after they beat ADO Den Haag 2-1 thanks to two first-half goals from Mohamed Rayhi. The home side are yet to score a point this season, a distinction they share with PEC Zwolle, who lost 3-0 at Vitesse Arnhem on Friday.

PSV recorded their second win in a row to complete the set of teams on seven points as they won 2-0 in Almelo. Steven Bergwijn celebrated his contract extension with a screamer into the top corner after 16 minutes, with 17-year-old Mohamed Ihattaren adding the second just before the hour mark.

Emmen moved off the bottom of the table with a 2-0 win at home to Heerenveen. Nikolai Laursen found the net with a free kick after just four minutes, before Glenn BIjl headed the second shortly before half-time.

In the first meeting of two newly promoted clubs, FC Twente and RKC Waalwijk shared six goals, including three in stoppage time. Waalwijk led 2-1 at the 90-minute mark, but Haris Vukic’s second goal of the game and a 92nd-minute strike by Rafik Zekhnini, who had a previous effort ruled out for offside, looked to have completed a sensational comeback.

However, there was still time for Paul Quasten to net an equaliser, before RKC were denied a last-ditch winner when Joël Drommel pushed Hans Mulder’s shot on to the post.

Willem II scored their second away win of the season as they overcame Fortuna Sittard 3-2 thanks to their Greek duo Marios Vrousai and Vangelis Pavlidis, with the latter scoring two goals including a penalty. Fortuna had taken an early lead through Vitalie Damascan.