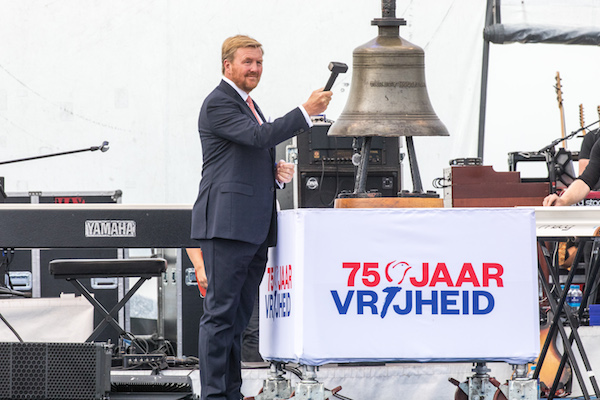 Eight veterans who helped to liberate the Netherlands during World War II were centre stage on Saturday at a ceremony in Terneuzen to mark the start of 75 years of freedom.

The eight, who came from Poland, America, Canada, Britain and the Netherlands, were honoured with a standing ovation at the event. Their number included 93-year-old Max Wolff, who, as a teenager, acted as an interpreter for allied troops  who took part in the liberation of France, Belgium and the Netherlands.

British veteran Roy Maxwell (97), who fought for the 4th Commandos in the Battle of the Scheldt, being greeted by King Willem-Alexander and Queen Máxima at Terneuzen just now#75jaarvrijheid #75YearsofFreedom pic.twitter.com/n0HKUPp3GM

The festivities were kicked off by king Willem-Alexander and will continue up to the autumn of 2020, to celebrate 75 years since the launch of the United Nations. Queen Maxima and Belgian king and queen Philippe and Mathilde were also in attendance.

Dutch prime minister Mark Rutte, who lit the freedom flame, asked in his speech if we are ‘all sufficiently aware what freedom is’. ‘For 75 years we have been free to live as we want to,’ he said. ‘The horrors of war have become abstract. That is something to cherish, to protect and to pass on to others.’

Dutch Prime Minister Rutte @MinPres thanks veterans for their contributions to our freedom #75jaarvrijheid pic.twitter.com/5Dus9HlatF

Saturday’s event marked 75 year since the Battle of the Scheldt, which is seen as a turning point in the war. During the battle, allied troops opened up the shipping route to Antwerp so the port could be used to supply allied forces in north-west Europe – a move which was crucial for the liberation of Belgium and the Netherlands.

An international fleet of 11 navy ships fired a salvo of shots over the Westerschelde estuary as an honour to the veterans present and the 10,000 soldiers and civilians who died in the offensive.

King Willem-Alexander then sounded the bell which was sounded in 1944 to say that the passage to Antwerp was clear.

America’s ambassador to the Netherlands Pete Hoekstra told broadcaster NOS it is important to remember the enormous sacrifices made by allied troops and the resistance. ‘We have had 75 years of freedom and prosperity,’ the ambassador said. ‘We want to continue for another 75 years.’