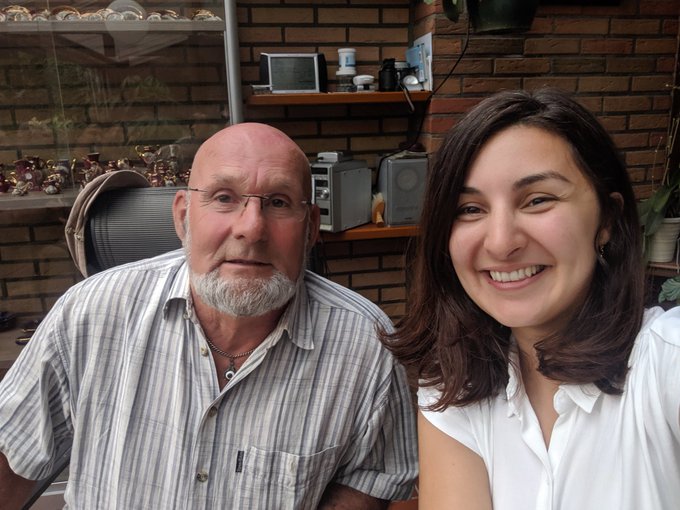 A Kurdish former child refugee who ended up in the Netherlands when she was five years old has been reunited with the man who gave her a bicycle after a Facebook appeal.

Mevan Babakar, now 29 and who lives in London, was retracing her refugee footsteps when she used the social media site to try to find the man who gave her a ‘big shiny bike’ when she lived at a refugee camp near Zwolle in 1994.

‘It was the kindest thing that happened to me at a difficult time and that is why I want to thank him,’ she told local paper De Stentor later. ‘It taught me that kindness can exist everywhere, no matter how terrible things may seem.’

Hi internet, this is a longshot BUT I was a refugee for 5 yrs in the 90s and this man, who worked at a refugee camp near Zwolle in the Netherlands, out of the kindness of his own heart bought me a bike. My five year old heart exploded with joy. I just want to know his name. Help? pic.twitter.com/XzUgHzllYb

The social media appeal, made while Mevan was in Zwolle retracing her steps as a child refugee, was shared thousands of times, picking up more clues along the way, and eventually leading to the man.

They were reunited on Tuesday afternoon. The man now lives in Germany.

AND someone else who worked at the camp got in touch, Sandra, she was incredible too, she helped me use a computer for the first time! I now work in tech!

More so than anything I remember these small kindnesses growing up, they helped shape me.https://t.co/RPdpNV2cMf

Another camp worker, who helped her to use a computer for the first time, also got in touch after the first tweet.

AND someone else who worked at the camp got in touch, Sandra, she was incredible too, she helped me use a computer for the first time! I now work in tech!

More so than anything I remember these small kindnesses growing up, they helped shape me.https://t.co/RPdpNV2cMf

Mevan’s family moved through Turkey, Azerbaijan and Russia before spending a year at the refugee camp near Zwolle for a year and finally settling in London. She now works as head of fact checking at independent fact checking charity Full Fact.