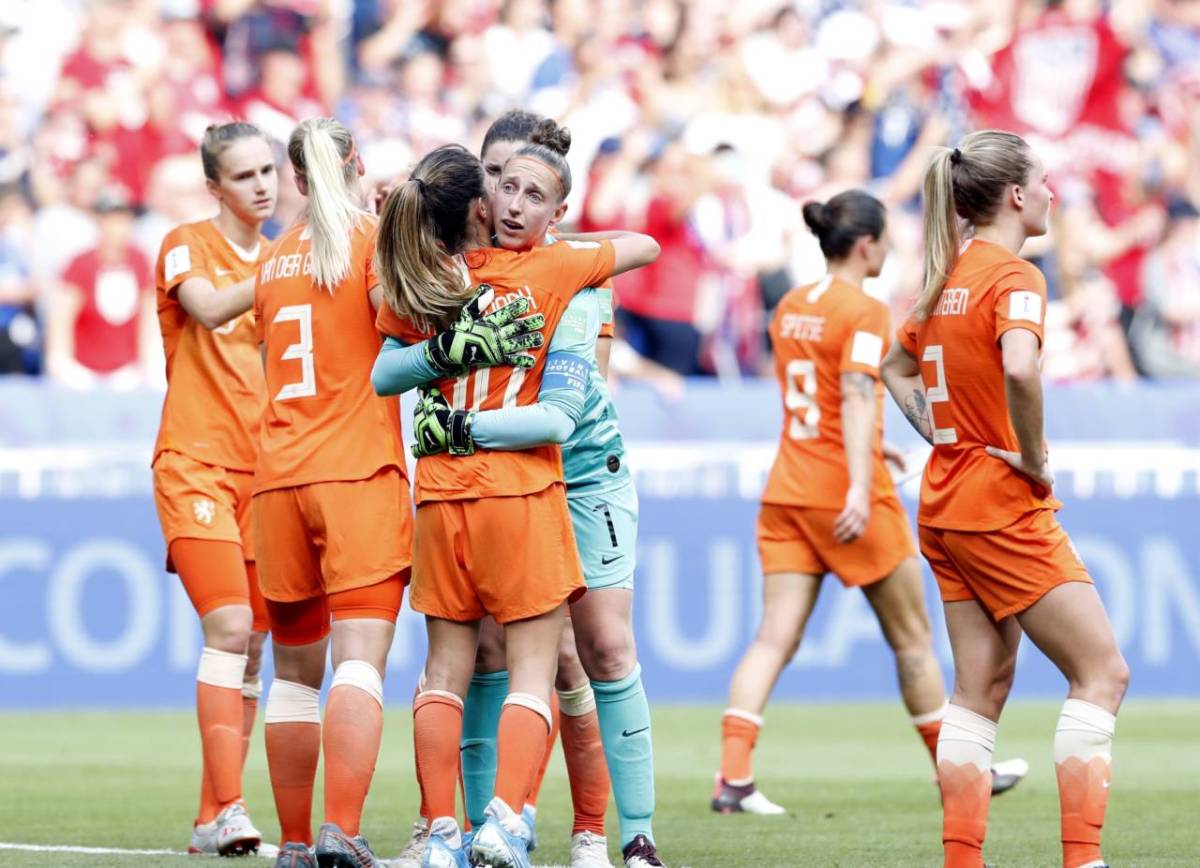 The players after the final whistle. Photo: Chine Nouvelle/SIPA via HH

The Dutch women’s football team said they were ‘disappointed but proud’ as they prepared to head home from France clutching their World Cup runners-up medals.

‘Of course there is disappointment, but we have had a fantastic tournament. This is the outcome and I’m very proud,’ said goalkeeper Sari van Veenedaal.

‘I think we played the way we planned and it worked. We just couldn’t get the result. That’s down to our opponents as well. I think our sense of pride will quickly overcome the disappointment.’

The USA were overwhelming favourites and defending champions going in to Sunday’s match in Lyon, but it took an hour for them to break down the well-organised Dutch defence.

Van Veenendaal, who also takes home the Golden Gloves trophy as goalkeeper of the tournament, made a string of top-class saves in the first half but could do nothing about Megan Rapinoe’s penalty in the 60th minute. The spot-kick was awarded on the advice of the VAR panel after Stefanie van der Gragt made contact with Alex Morgan in the penalty area.

‘I wanted to clear the ball away and didn’t see her,’ said Van der Gragt. ‘So I missed the ball. It might have been a soft penalty, but I did touch her.’

Nine minutes later the Dutch were caught trying to launch a counter-attack and Rose Lavelle split the defence before burying a low shot in the bottom corner. Vivianne Miedema went close to pulling a goal back but Van Veenendaal was the busier goalkeeper in the closing stages.

The result means there will be no tour of the canals of Amsterdam for the team, who said they only wanted a victory parade if they won the World Cup, in contrast to the men’s teams that lost the finals of 1974, 1978 and 2010.

The players received a surprise visit in the dressing-room after the game from King Willem-Alexander and princesses Amalia and Ariane, who congratulated them on their performance.

Coach Sarina Wiegman said the royal visit reflected the way the women’s game had broken through during the tournament. Around 5.5 million people tuned in to watch the final on Sunday evening, a record audience for a women’s match.

‘The world around us is changing,’ said Wiegman. ‘It’s a credit to them that they were able to perform so well under such high pressure.

‘We will continue to grow so that we’ll be able to beat the USA in the foreseeable future.’

As one of three European teams to reach the semi-finals, the Netherlands have also qualified for next year’s Olympic football tournament in Tokyo.