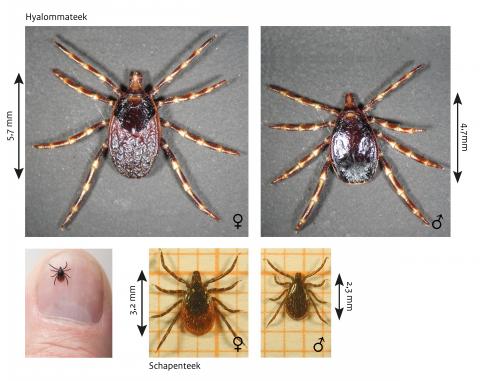 The giant tick found in Drenthe last week has been confirmed as a Hyalomma marginatum, a species originating in tropical climates and previously confined to southern parts of Europe.

The ticks, thought to be brought in by migrating birds, have striped legs and their body is almost twice the length of ticks normally found in the Netherlands. This can grow to around two centimetres when they are engorged with blood.

Unlike common ticks, the giant tick actively hunts its prey and can identify targets up to nine metres away. They have also been observed follow their target for ten minutes or more, walking or running a distance of up to 100 metres, according to the European centre for disease prevention and control.

The ticks are known to carry several diseases, including Crimean-Congo Hemorrhagic Fever but this tick was not a carrier, the public health institute RIVM said.

The tick was, however, carrying bacteria which can cause Spotted Fever (Rickettsia aeschlimannii), which is rare but easily treated by antibiotics. Spotted Fever was also found in ticks in Austria last year.

The Drenthe tick is the second Hyalomma to be found in the Netherlands. One was identified in eastern Gelderland in early July.