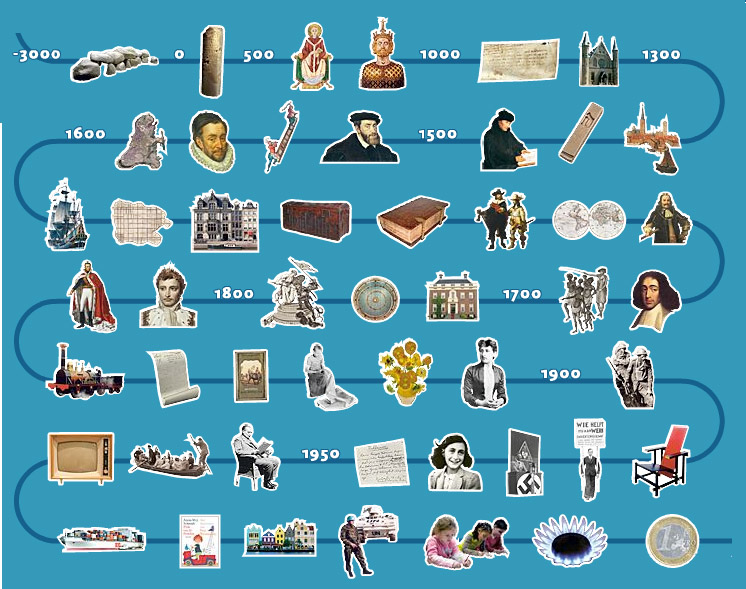 The Canon of the Netherlands, a series of 50 ‘windows’ on Dutch history, was put together in 2005 ‘not to indoctrinate but to inform young people where we, where they, come from,’ as the then prime minister Jan Peter Balkenende put it.

It covers 50 key events and periods which helped shaped the country, from the early farmers and the arrival of the Romans, to women’s rights, two World Wars and the great flood of 1953.

Now, 13 years later, education minister Ingrid van Engelshoven has briefed a commission headed by historian James Kennedy to evaluate the canon and pay more attention to ‘the stories and perspectives of different groups in society and the dark sides of history’.  Reactions to the move have been mixed.

In the NRC Ton van der Schans, chair of the association of history teachers expresses doubts about politically motivated interventions in the canon.

‘I would not like political trends, ideology and fashions to determine the contents of the canon. The minister makes a noise about women, disadvantaged groups, black pages in history and that we need to revise them. But we shouldn’t make everything non-Western sacrosanct,’ he told the paper.

Historian, author and former MP Zihni Ödzil, said many parts of history do appear in the canon. ‘We have not mentioned Tula, who was the first slave to rebel in Curacao. Or Sophie Redmond who was the first black doctor in Paramaribo. (…) Most people in the Netherlands did not experience a ‘Golden Age’. The picture would be more complete if it included what life was like at the bottom of society.’

According to Groningen university professor of history Mineke Bosch, the canon as it stands is not taking into account patterns of exclusion and inclusion based on, for instance, class, sex and race. Colonialism is not integrated in Dutch history and lacks a systematic gender perspective. The women’s movement should not be the only moment in the canon to feature women,’ she told the paper.

In the Volkskrant histroian and committee chairman James Kennedy argues that the ‘dark side of history’ already has a place in the canon but that a balance is lacking. ‘There are lots of positive things that you can be proud of and things that are beyond the pale. Is there a balance between these things? Is this a fair representation of Dutch history? That is what we have to find out.’

But Kennedy himself is not an uncontroversial choice. Author August Hans den Boef in a discussion with historian Leo Lucassen wonders whether he is the right man to effect the changes because, a declared Christian, Kennedy ‘made a Christian-inspired version of the canon in 2007.’

However, according to Lucassen the main problem with the canon is not Kennedy’s Christian take on history but the canon’s lack of a ‘dynamic international context’. In such a context, matters like migration and mobility (of labour and ideas) are given more space because it was this continuous interaction with the rest of the world – especially during the Golden Age – which was the dominant feature.’