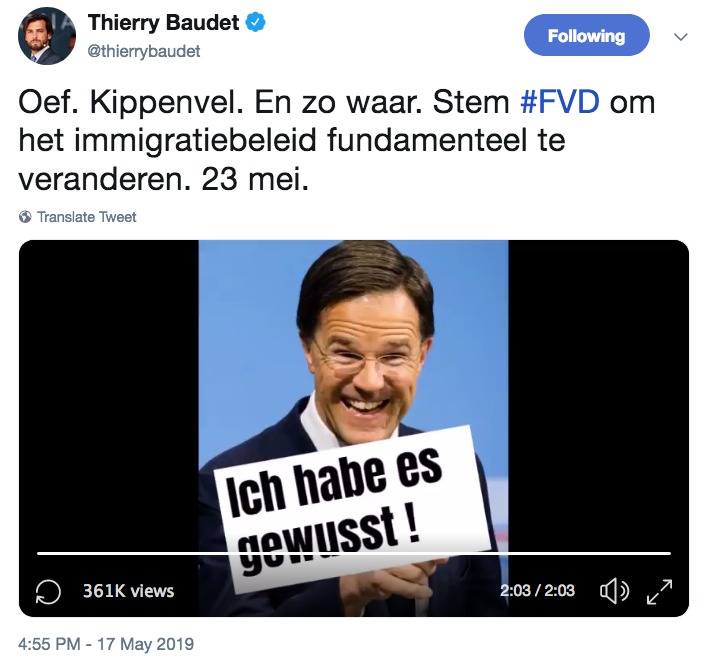 Forum voor Democratie leader Thierry Baudet has come under fire for retweeting an anti-immigrant video by a far right German women’s group for the second time.

The video features several young white women describing how they are ‘not safe because you refuse to protect us’ and stating that they have been ‘sacrificed and sold’.

‘Thanks to your immigration politics, we will soon be facing a majority of young men from a society that is the enemy of women,’ the text states, which has been translated into Dutch in Baudet’s retweet.

The speakers in the video repeat the phrase ‘Ich habe es gewusst’ – literally ‘I knew’ several times at the end of the film – a reference to the phrase ‘wir haben es nicht gewusst’ or ‘we did not know’, said to describe German attitudes to the Holocaust post WWII.

The phrase ‘Ich habe es gewusst’ is also stamped over photos of Mark Rutte, Jesse Klaver and Rob Jetten which have been added to the end of the film in the new version.

In his retweet, Baudet states ‘goosebumps and so true’. ‘Vote for FvD to fundamentally change immigration policy,’ he said.

D66 leader Rob Jetten has accused Baudet of ‘gutter politics’ for spreading the video. ‘By linking Rutte, Klaver and myself to rape and referring to the Holocaust, Baudet has shown his most sickening side,’ Jetten said.

Baudet first retweeted the video in January 2018, without the Dutch subtitles or the attacks on Dutch politicians at the end.

The film was made by women who are known associates of the neo-fascist Identitäre Bewegung group, and call themselves 120 Dezibel.

Over 1,000 people have commented on the use of the video in Baudet’s own time-line, most of which are highly critical. Some also refer to anti-women comments made by Baudet himself.