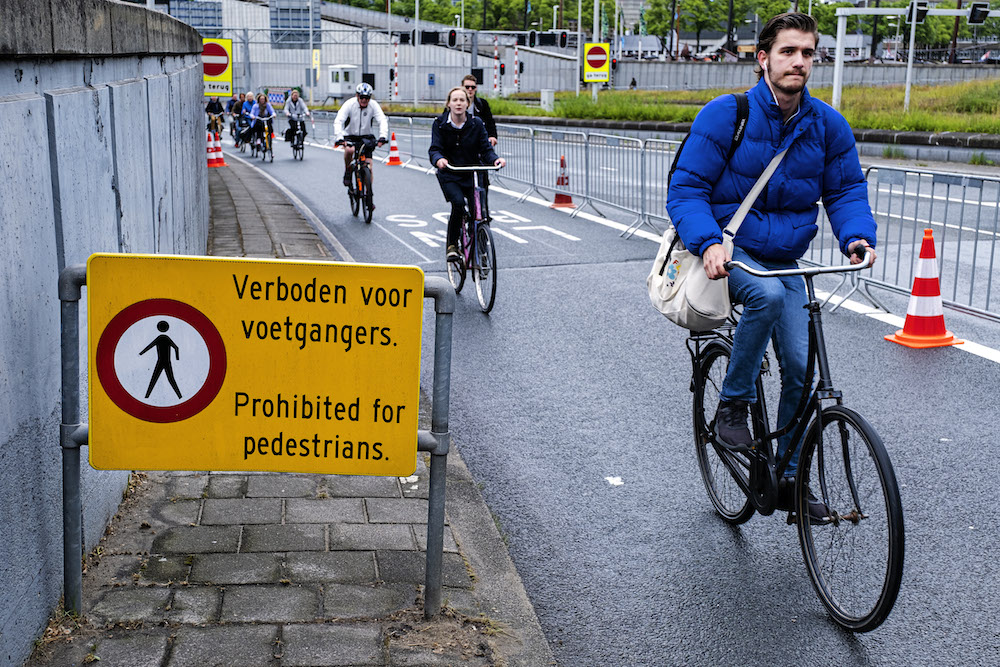 A strike by public transport workers on Tuesday led to plane cancellations and long traffic jams but there were no major problems reported.

Nevertheless, the evening rush-hour started early and by 4pm there were long tailbacks, particularly around Amsterdam and on the A4 to The Hague.

In Amsterdam, where there were no buses or metro, or ferry services, officials opened the IJ tunnel to bikes and mopeds so commuters could cross from north to south.

During transit strike, Amsterdam opens up car-only tunnel (1968) for cyclists.
In the process providing glaring evidence of how great this would work for the entire city if made permanent…

Regional bus services and the metro in Rotterdam were also halted by the strike, which will run until midnight as were some international trains. There were, however, very limited train services between Amsterdam’s central station and Schiphol airport – ordered by a court on Sunday to stop unsafe situations developing.

At Schiphol airport, dozens of flights were cancelled on airport advice and passengers also took advantage of schemes to allow them to change flights.  ‘We only advise you to come to the airport if strictly necessary,’ airline KLM said. ‘If you can, change or delay your travel plans.’

Some universities and colleges, including Amsterdam and Utrecht universities, changed the dates of exams planned for Tuesday because of the strike. ‘Many students these days have to travel to university and without public transport it will be very complicated,’ a UvA spokesman said.

The strike is part of a campaign to have the state pension age frozen at 66 and to ensure pensions rise in line with inflation.