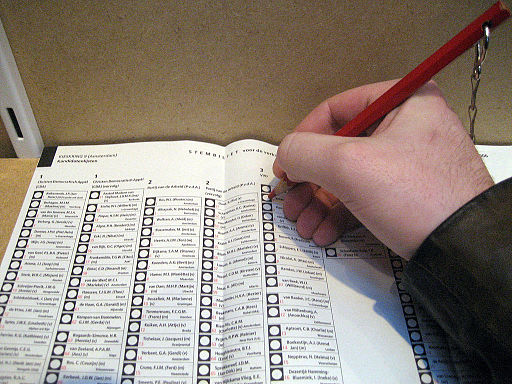 Home affairs minister Kajsa Ollongren has been asked to explain why so few of the EU nationals in the Netherlands are included on the voting register for today’s European parliamentary elections.

D66 MP Monica den Boer has sent eight written questions to the minister based on reporting by DutchNews.nl about the problems facing EU nationals who wanted to vote here.

Last week it emerged that just 12% of the 490,000 EU nationals in the Netherlands have signed up for the register and people from all over the country say they have not had information about the need to do so from their local authority.

In particular, Den Burg has asked Ollongren if she considers that Dutch local authorities did enough to make sure people were aware of the need to register and what she will do to ensure better results next time.

‘Do you see a link between the local authority failings and low registration rate of 12%,’ the MP asked.

The ministry wrote to every local council in December, telling them to brief EU residents on the need to register to vote and advising them to actively contact people by letter.

But Rijkswijk, Gouda, Heerlen, Roermond and Amersfoort are among the towns and cities where people say they did not get any form of communication from city hall.

There was a lot of confusion prior to the April 9 deadline about whether British nationals would be able to vote because of Brexit, leading Amsterdam and The Hague to update their websites.

And several people have come forward saying they have never been required to register in the past. ‘I thought that if you are registered with your local gemeente then you didn’t have to register to vote? I haven’t registered to vote and yet have received my voting certificate for the 23rd,’ one EU national said on Facebook.

A spokeswoman for the home affairs ministry told DutchNews.nl that our question about not being required to register in previous elections is a ‘misunderstanding’. ‘The current rules also applied in earlier EU elections,’ she said. As after every election, there will be a full evaluation of the problems, she said.

In Britain too, people are being turned away from polling stations because of ‘administrative errors’.

If you expected to be able to vote and could not, of if you feel your local authority did not keep you informed, feel free to comment in the section below.