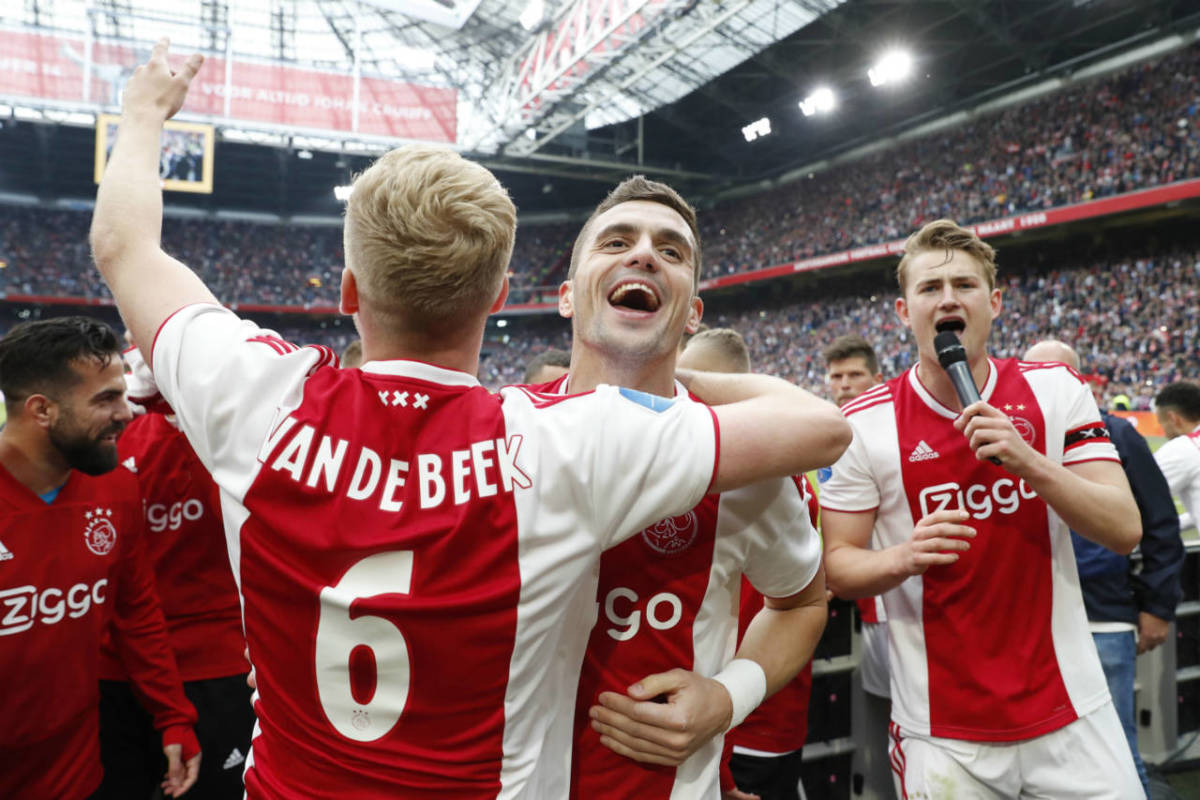 Ajax all but wrapped up their first Eredivisie title in five years with a 4-1 win over Utrecht as their only challengers PSV lost 1-0 in Alkmaar on an afternoon of high drama.

The Amsterdam club still need a point in their final game at 17th-placed De Graafschap to put the ribbons on the trophy, but PSV would have to overturn a goal difference deficit of 14, making the task all but impossible.

Ajax appeared to be still reeling from the shock of their Champions League exit as Othman Boussaid silenced the ArenA with a goal for Utrecht in the first-minute. Veteran Klaas-Jan Huntelaar settled his team’s nerves with a 14th-minute equaliser, before Donny van de Beek put the home side in front on the stroke of half-time.

Four minutes after half-time PSV, who began the day level on points with Ajax, saw their chances start to slip away as Guus Til put AZ Alkmaar 1-0 ahead in the AFAS Stadion.

Dusan Tadic then made sure of the points for Ajax with two goals late in the second half, including a penalty, to send the packed ArenA into delirium as PSV failed to find an equaliser.

The players celebrated on the pitch, with Frenkie de Jong acknowledging the crowd at the end of his last home game before leaving for Barcelona and David Neres, injured in the warm-up before Wednesday’s Champions League game against Tottenham, coming out of the stands to join his team-mates.

De Jong stopped short of claiming the title, but said: ‘We have a very, very good chance and you could see our delight on the pitch at the end. That says it all.’

PSV coach Mark van Bommel conceded the championship was gone. ‘The chance is still there, but we have to be realistic: it’s not going to happen,’ he said.

Elsewhere, Emmen guaranteed themselves a second season of Eredivisie football with an astonishing comeback win in Tilburg.

The side from Drenthe were 2-0 down to Willem II 2-0 after 39 minutes, but pulled a goal back before half-time and scored twice more in the second half, with Michael de Leeuw bagging the winner in the 79th minute.

That result meant Excelsior and De Graafschap will have to fight for their Eredivisie places in the end-of-season play-offs, despite Excelsior snatching an extraordinary 5-4 win at Heracles Almelo.

The Rotterdam club were 4-2 down after just over an hour when Lerin Duarte added to Adrian Dalmau’s hat-trick. But Jurgen Mattheij gave Excelsior hope when he headed in from a corner on 72 minutes before Dennis Eckhert and Elias Mar Omarsson struck in the final minutes to complete the comeback.

They will be joined in the play-offs by De Graafschap, who were hammered 6-1 by Vitesse Arnhem. NAC Breda’s relegation was confirmed as they went down 2-1 at Heerenveen, for whom Mitchell van Bergen scored a 90th-minute winner.

Willem II’s defeat to Emmen was a boost for the latter’s northern rivals Groningen, who beat Fortuna Sittard 3-0 to move into the last Europa League play-off slot. Groningen travel to Emmen for the last game of the season on Wednesday night needing a win to be sure of finishing eighth.

ADO will need to beat Willem II by a five-goal margin in their final game and hope Groningen lose heavily to Emmen, while any kind of win will be enough for the Tilburgers if Groningen slip up.

In the only match with nothing at stake, Jaap Stam signed off as PEC Zwolle’s manager with a 4-2 home defeat to VVV, with Peniel Mlapa scoring a hat-trick for the visitors. The former Ajax, Manchester United and Lazio defender is taking over from Van Bronckhorst at Feyenoord next season.