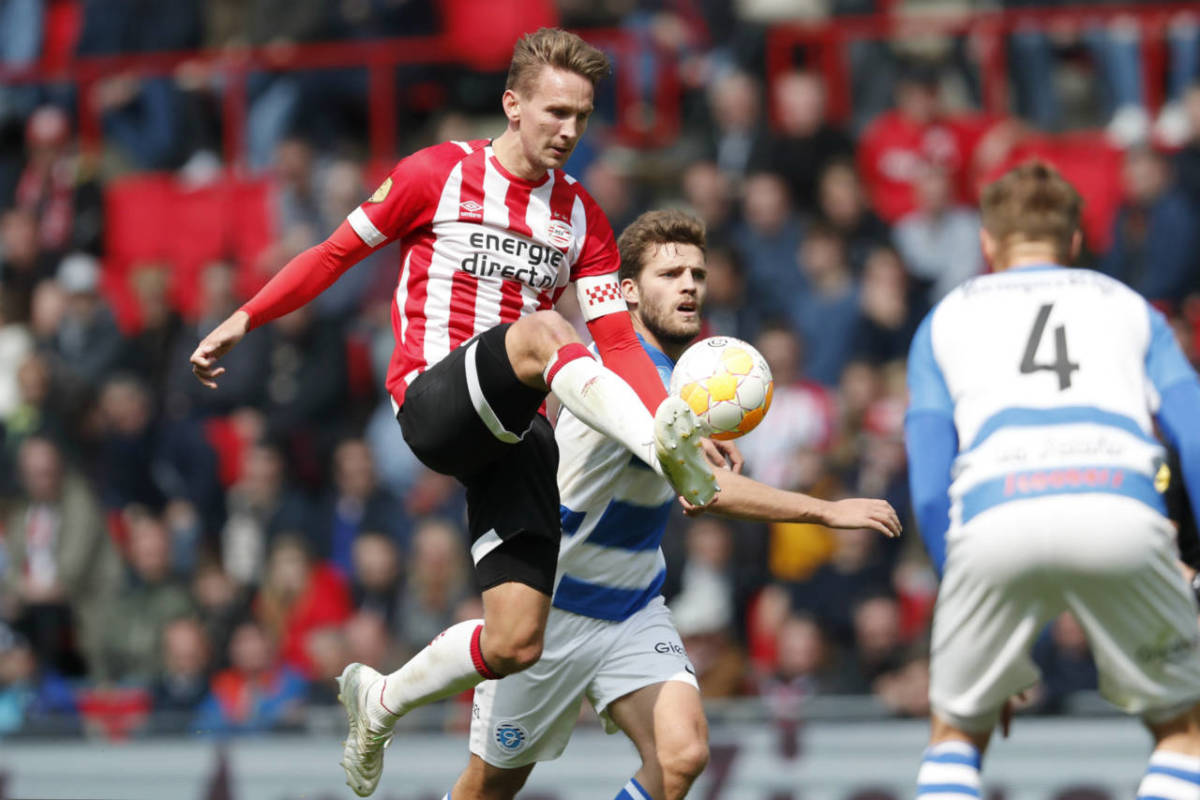 PSV Eindhoven survived a scare against struggling De Graafschap to draw level on points with Ajax at the top of the Eredivisie.

The visitors took the lead in the Philips Stadion with a header by Delano Burgzorg and held on until midway through the second half, when Steven Bergwijn levelled from the penalty spot.

Nine minutes later top scorer Luuk de Jong clipped in a Denzel Dumfries cross to claim the points, but PSV were unable to improve on their goal difference, which could be crucial if the title race goes to the wire.

Manager Mark van Bommel was satisfied with the win. ‘We missed a huge amount of chances,’ he said. ‘We didn’t play well… Looking back we can say we could have scored more, but we’re happy to have won.’

Ajax’s 6-2 victory over Excelsior on Saturday, including a hat-trick for veteran striker Klaas-Jan Huntelaar gives the Amsterdammers a 12-goal advantage. Both teams have two home games and two away fixtures left this season.

There was a concern for Erik ten Hag’s side ahead of their midweek Champions League side when midfielder Frenkie de Jong went off after 28 minutes clutching his hamstring.

‘I didn’t want to take any risks,’ said Ten Hag. ‘He had no complaints before the game, he was fit to play. But I saw he wasn’t moving easily.’

Excelsior remain in 17th place, behind De Graafschap on goal difference and four points ahead of NAC Breda, who snatched a draw at home to Emmen in Friday night’s relegation clash.

Emmen looked to be taking a big step towards safety when they went ahead through Luciano Slagveer on 15 minutes, but two minutes from time goalkeeper Kjell Scherpen spilled a cross at the feet of Erik Palmer-Brown.

Dick Lukkien’s side remain three points ahead of the relegation play-off zone and two points behind Fortuna Sittard, who also conceded a late leveller in the Limburg derby with VVV Venlo.

Feyenoord tightened their grip on third place with a narrow win at home to Heracles Almelo in a bad-tempered game. Nikolai Jørgensen was sent off for the home side after 70 minutes for a retaliatory kick on Tim Breukers, but Steven Berghuis sealed the points with his second goal from the penalty spot.

The Rotterdammers are now four points clear of AZ Alkmaar, who were edged out by ADO Den Haag in a dramatic match. Trailing 2-0 with five minutes left, AZ looked to have salvaged a draw with two late goals from Albert Gudmundsson, only for Sheraldo Becker to bag a late winner in the fifth minute of injury time.

In the battle for the European play-off places, Utrecht and Vitesse Arnhem played out a 0-0 draw that saw both teams denied a goal by the VAR panel. The result allowed Willem II Tilburg to move to within a point of seventh-placed Vitesse to a point by beating PEC Zwolle 2-0, with Aleksandr Isak taking his goal tally to 12 in as many games.