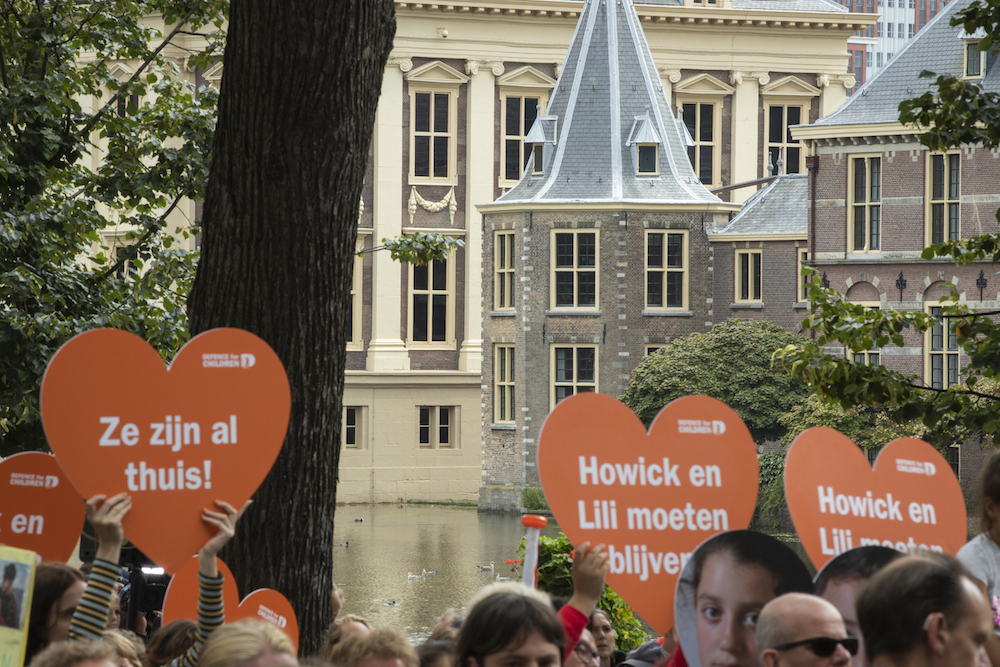 A demonstration in support of the children outside parliament. Photo: Laurens van Putten / HH

The mother of two Armenian children who became key figures in the campaign to change the rules on well-rooted refugee children, will be allowed to rejoin her offspring in the Netherlands, Dutch media said on Wednesday.

Armina Hambartsjumian was deported to Armenia in 2017, nine years after she came to the Netherlands with Howick, then aged three, and Lili, aged two. The children, then aged 12 and 13, went into hiding to avoid being sent back.

Lili and Howick became part of a high profile campaign to stay in the Netherlands, even though they did not meet the strict terms of the child refugee amnesty, and appeared on television several times to make their case.

Junior justice minister Mark Harbers eventually relented and last September used his discretionary powers to allow the children to stay in the Netherlands, after they vanished for a second time hours before they were due to be put on a plane.

Howick told children’s television programme Jeugdjournall that he is ‘super happy’ his mother can return to the Netherlands. The family’s lawyer has also confirmed that she has been granted permission to return, broadcaster NOS said.

The issue placed severe strain on the coalition with ChristenUnie MPs saying there could be ‘no question of deporting’ the children until proper arrangements had been made to house and educate them in Armenia.

Earlier this year, the cabinet agreed to relax the rules of the children’s amnesty and review all the outstanding cases.