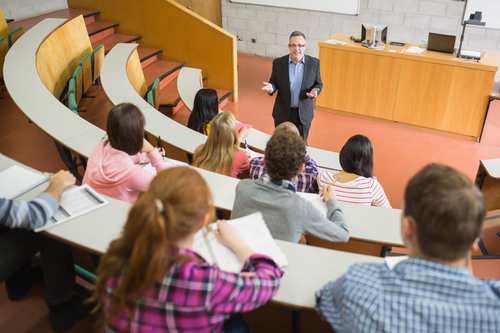 School pupils and students are being urged to report ‘left wing indoctrination’ in the classroom to a special hotline set up by the nationalist political party Forum voor Democratie.

The hotline was launched by the party’s scientific institute, shortly before the party’s strong performance in last week’s provincial elections, and was condemned by ministers during a debate on Wednesday.

‘In the Dutch education system, pupils and students are being indoctrinated with the favourite political ideas of their teachers by the conveyor belt,’ the Renaissance Institute states on its website.

‘It is happening in both subtle and less subtle ways and more and more pupils and parents have had enough,’ the website states. Pupils are being urged to email the institute their experiences with ‘biased exam questions, one-sided text books, oikophobia projects and partisan teachers.’

Oikophobia in a political context refers to political ideologies that are said to repudiate one’s own culture and laud others.

Education minister Ingrid van Engelshoven said the initiative was both distasteful and detrimental to the safety of teaching staff. Nevertheless, ‘it is up to the schools how to deal with this,’ she said.

The Renaissance Institute says it wants to produce an inventory of left wing indoctrination in the classroom and to find out how often it happens. ‘Pupils don’t have to film their teachers,’ spokesman Rob Rooken told RTL Nieuws. ‘There are all sorts of ways which they can make reports.’

‘We are not going to publish the names of teachers,’ he said. ‘We are simply compiling a list.’

The initiative is supported by the anti-immigration PVV which also claims schools are indoctrinating children with left-wing ideas. ‘It is a very good idea. Actually it was mine,’ MP Harm Beertema said.

Arnhem trade school teacher Tommy Derksen has already reported himself via an open letter to Forum. ‘I don’t want anyone else to have to take the trouble to report me – so I am making this registration voluntarily,’ he said on Twitter. ‘History teaches us what telling tales and intimidation leads to.’

At the same time, Van Engelshoven has urged school directors to do more to support teaching staff who are outed on social media by pupils.

In one recent case, a teaching assistant was suspended after describing the prophet Mohamed as a paedophile.