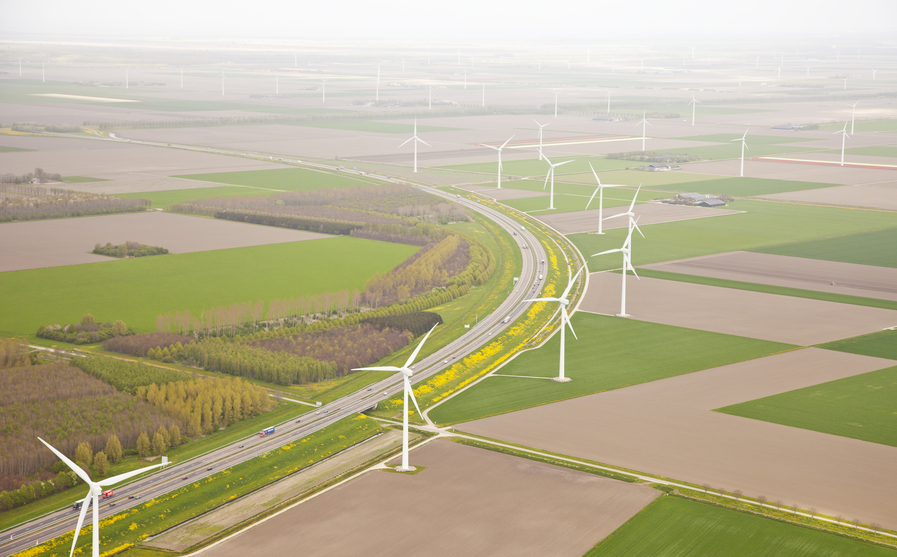 WInd farms on land have become a hot political potato.

Most Dutch provinces are set to miss their target for wind energy by the end of next year as a result of legal delays and resistance by political parties.

The transition to renewable energy is one of the issues dominating the campaign for next week’s provincial assembles, as planning and power generation falls within their remit. All 12 provinces signed an agreement in 2013 to build enough wind turbines to generate 6,000 megawatts of electricity by 2020.

The Volkskrant reported that Noord-Brabant and Zuid-Holland would definitely miss their targets, while Utrecht, Limburg, Drenthe and Friesland also risk falling short. Any province that fails to achieve its target will have to make up double the amount of the shortfall in the following three years, either from wind power or other renewable sources.

However, the issue has also generated fierce resistance from parties that dispute the need to tackle climate change. According to a survey by NOS 55% of parties contesting the provincial elections are against building more wind turbines on land.

The most vociferous opponents are the far-right populist parties PVV and Forum voor Democratie, whose leaders Geert Wilders and Thierry Baudet have been openly hostile to climate science. The parties’ manifestos explicitly rule out any further development of wind or solar energy.

Denk is also opposed to building more wind farms on land, while around half of the VVD’s provincial groups and most 50Plus factions are also against turbines. Even GroenLinks calls for restrictions in some provinces such as Gelderland, where it says wind farms should be located away from residential areas.

At the other end of the spectrum is the Animal Rights Party (PvdD), which has embraced a ‘deep green’ programme in recent years and has called for every province to be climate neutral by 2030.

In some rural provinces the campaign against wind power has led to heated exchanges. The National Co-ordinator for Counter-Terrorism and Security has warned of a risk of radicalisation and extremism following a series of incidents of threats, vandalism and intimidation.

Anonymous posters in Drenthe depicted local ChristenUnie assembly member Tjisse Stelpstra as a Nazi concentration camp guard after he led calls for the province to switch from oil and gas to renewable sources. ‘We can’t keep saying no if we want to stop gas extraction and shut the coal-fired power stations. We need to keep talking to each other about how and where,’ he said.

Plans for more wind power have also been held up by legal challenges. Jan Nieboer, whose tax advice bureau in the Veen colonies in the north of the province, has become the centre of a campaign to take what he calls ‘feudal wind farmers’ in the administrative courts.

He claims a law passed in The Hague that allows the government to co-ordinate national crisis prevention plans has allowed central government to steamroller the interests of people living in rural areas. ‘The provincial authorities have bent over backwards,’ Nieboer told De Volkskrant.

‘I am warning that there will be consequences if the turbines are built,’ he added. ‘We will have a war in the Veen colonies until the last windmill has been flattened. I’m not playing with fire, but the wind farmers and the province are.’

Although the Council of State has dismissed the bulk of objections to windfarm projects, the time spent handling them has hampered provincial authorities’ efforts to hit their deadlines and led to complaints that they are being unfairly punished.

In Friesland the provincial council only secured permission to build a wind farm in the IJsselmeer last year and argues it should not be made to pay for are ‘beyond the influence of the province’. It has stated it ‘will not agree with any doubling of the portion of our contribution that we have not achieved.’