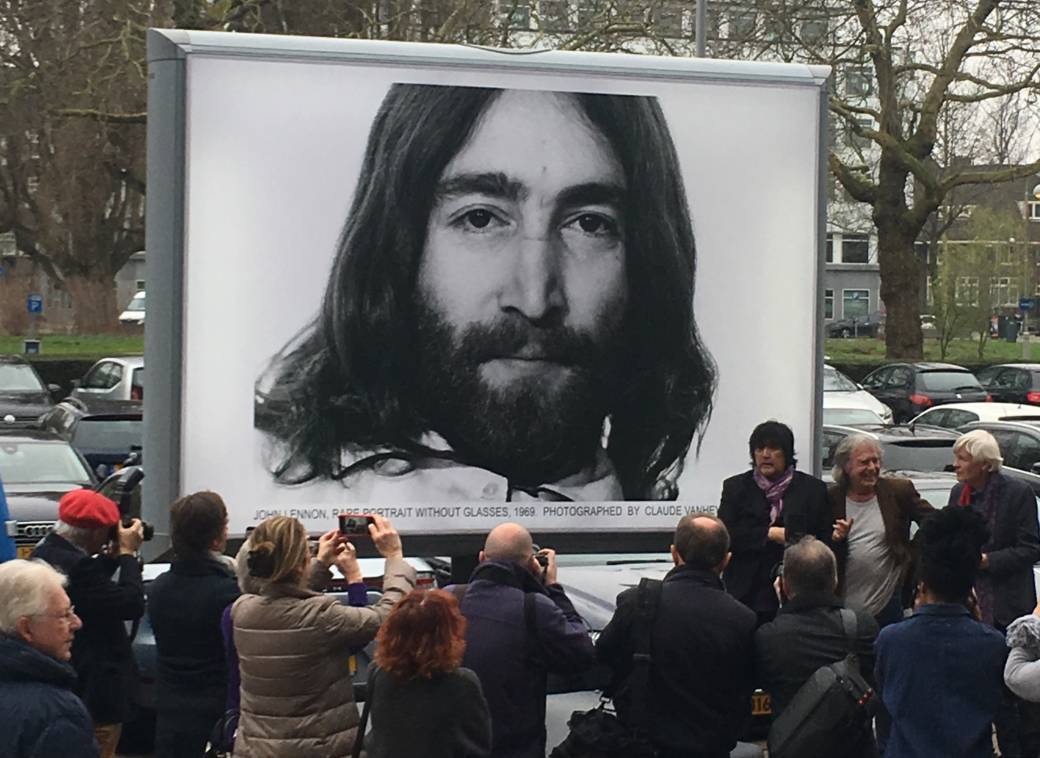 They invited one shy, Dutch photographer to breakfast, they were constantly watched for any untoward activities…and they did pay the hotel bill.

These were some of the memories revealed at the launch of a new exhibition at the Amsterdam Hilton of 50 photographs taken in 1969 of John Lennon and Yoko Ono, the world’s most famous honeymooning couple protesting for peace with a week in bed.

Turned down by another Dutch hotel, the couple arrived at the Hilton from Paris in a white Rolls Royce, emptied what was room 902 of all furniture apart from the bed and invited in the world’s press for 12 hours a day to record their protest against the Vietnam war.

Now, 50 years later, some of the most famous images of Lennon and his bride are on display at the Hilton, together with an exhibition of Lennon and Ono’s artwork and a video room telling the story of their unprecedented demonstration.

Mick Boskamp, son of Lennon’s friend Hans Boskamp, told DutchNews.nl that Lennon wanted to do something completely different and decided Amsterdam was the place to do it. ‘My father met John Lennon working in London, and when John was going to get married in ’69, he told my father he wanted to do something fun for his honeymoon. Amstel hotel said no, and they still regret it. Then they came across the Hilton, which said yes.

‘The whole week, my father dealt with the press. And the funniest thing my father said was that he had to stay in the room the whole time – and you couldn’t leave them alone because they had just got married!’

Nico Koster, then a photographer for the Telegraaf, and now 87, has 18 images in the new exhibition and said that it was an incredible moment. ‘It was a once-in-a-lifetime happening,’ he said. ‘I’m a Beatles fan, of course, and I was proud as anything to have the chance to photograph it. The atmosphere was very relaxed, John and Yoko were unusually friendly, you could photograph them from all sides – the photos say it all.’

He added that the pack of photographers all had one goal: to capture something different. ‘The aim was of course to get them out of bed,’ he said. ‘They were in bed for the press, but if you got them out of bed, that was a bit of a kick – so we made sure it happened. I don’t think it made a difference to the war in Vietnam, but it did to public opinion: they got something going.’

The photographs range from newspaper-style documentation to amateur fan photos, and also include the last photo of Lennon without his glasses taken by Claude Vanheye, a shy teen who was invited by the couple to breakfast. ‘It was an eye-opener to see it from their point of view,’ said exhibition co-creator Govert de Roos. ‘Yes, it is two people in bed but every photographer has his thing.’ 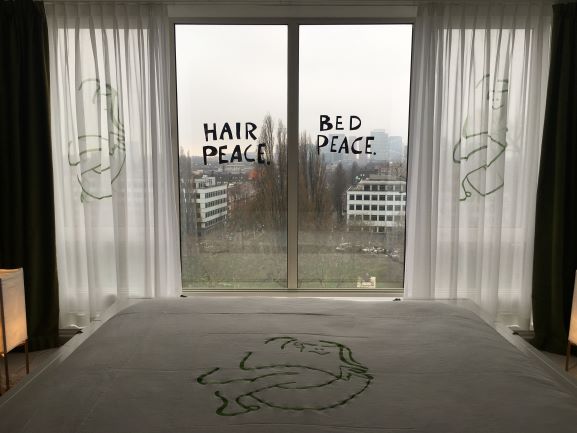 The hotel will run events from 21st to 31st March in honour of the bed-in, including a display of 25,000 tulips, the ‘What happened in Room 902’ exhibition and a show of Lennon’s art which includes a hand-written interview with a young Dutch fan, and images for sale. It’s also possible to take a peek at the room where the loved-up couple demonstrated, now called 702 – with shoes off or shoe guards on. Meanwhile, on 3rd April there will be a jazz and pop concert at the Concertgebouw, Remember Love.

At the time of the bed-in protest, Lennon was in the process of splitting from the Beatles and was busy recording and exploring his other love of drawing, with Ono – things he would develop in the years before he was shot dead at the age of 40 in 1980.

Introducing the exhibition, Hilton hotel general manager Roberto Payer said that at the moment of the bed-in, Amsterdam became a focus for the world. ‘We are the first place in the world where he dared to stand and call for peace in a very beautiful way,’ he said. ‘And they did pay the hotel bill!’

Koster agreed it was an extraordinary moment. ‘As far as getting world peace, we could do with having it again,’ he said. ‘But who would do it?’’