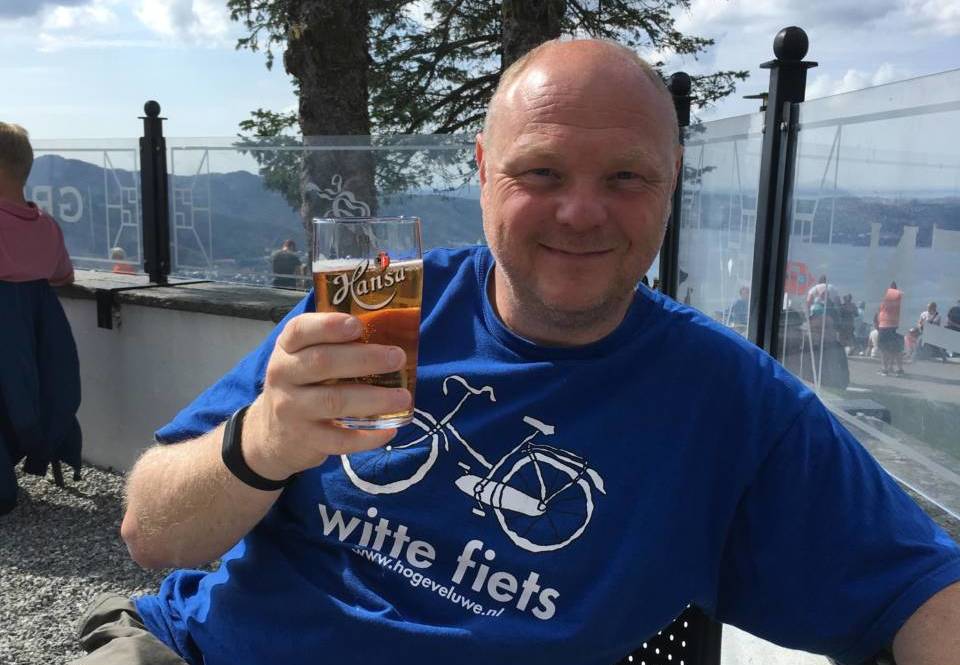 Chris Mellor, 50, lives in The Hague and has three Dutch children. If Brexit happens, he says, he will go for Dutch nationality via the option ruling, which means he can keep his British nationality.

‘I grew up in Huddersfield and spent my youth in West Yorkshire, except for a year at polytechnic in Sunderland. I met my Dutch wife on a summer camp in the US. We lived together for a year in the UK, but it was 1992, I was 22 years old and there was nothing going on.

‘We came over one Easter to see her parents, I happened to pass the uitzendbureau where she used to work, and they found me a job with Shell as a technical assistant. When they discovered I was good with computers I got farmed out to a professional computer company. After that I had spells at KPN and in teaching, until I ended up at Fugro where I’ve worked for the last 14 years.

‘I’m very settled here. I always joke I’m one of Margaret Thatcher’s economic refugees. I’ve got three children aged 20, 18 and 15 and they’re all Dutch. My daughter is quite seriously ill, and while I’m sure she’d get good care if we had to go back to the UK, it would be difficult. Whereas here it’s no problem. So we’re not moving.

‘As it stands I’m a UK citizen, but if Brexit happens I’ll take Dutch citizenship via the option, because then I can retain my British nationality. It’s strange in a way, but in another sense it’s just a passport, isn’t it?

‘The British government has done nothing for its citizens in Europe. At first we were used as a bargaining chip until they were told to stop. After that we were left. I didn’t even get a vote in this referendum, so why should I bother about my citizenship?

‘The Dutch have been pretty good. They’ve taken action and reassured us that we’re not going to be kicked out. I see it from other member states as well. They’re all trying to help their residents, in contrast to the UK where they just seem to want to cause trouble and strife. And I’ve always got the fallback of the dual nationality option, so legally everything’s on my side.

‘People were sold a fantastic amount of lies and misinformation. They were told they’d get £350 million a week for the health service. They were told immigrants were stealing their jobs. What, brain surgeons? Or fruit pickers and cleaners – do they really want to take over that work? My Dutch friends think it’s ridiculous. At first they just asked: why? Why would anybody want to purposefully jump off a cliff? The UK has become a laughing stock.

‘When we joined in 1974 there was still a lot of nationalism and politics around – I remember people selling National Front magazines and socialist newspapers in Huddersfield. But if you look now at the prosperity, the stability and the educational options, everything has progressed. Trade is much easier, and when trade’s easy and you can share resources that gives you stability. History tells us there’s safety in numbers.

‘I was back in Britain one time for a bank holiday weekend and trying to help a woman who didn’t realise it was free parking, and she just said to me: ‘Why don’t you just go home?’ Because I was in a Dutch car. I gave her a gobful in Yorkshire and she looked quite sheepish. My experience is that a lot of people are full of hatred and they need to get it out, and a foreign-registered car is an easy target.

‘I’m sad that people are willing to throw away so much potential. The EU isn’t perfect, but I strongly believe it’s maintained peace and prosperity on the European mainland for the last 30 or 40 years. I think the UK will be a sadder and lonelier place when it pulls up the drawbridge, but all I can do is say good luck.

‘The world has changed enormously over the last 100 years. At the beginning of World War One people were sent off to die and they never questioned it. They thought it was their duty. ‘Go fight, young man, because the Hun is on your tail.’ When the Hun was actually your brother. That’s the whole stupid thing. We’ve spent a century trying to fix that and teach people to think critically, and now people are trying to go back to stiff upper lips and the British Bulldog spirit. It’s all bullshit.

‘I still hope Brexit won’t happen. If it does I think the UK will end up like Norway. And if you ask the Norwegians they’ll tell you: we have to do everything and pay for it, but we’ve got no say. It’s silly, really. I just hope that people realise very quickly who the real winners are and there’s another vote. So maybe in 10 or 15 years they’ll be back in.’

Chris Mellor was talking to Gordon Darroch. If you would like to be interviewed, please contact editor@dutchnews.nl.