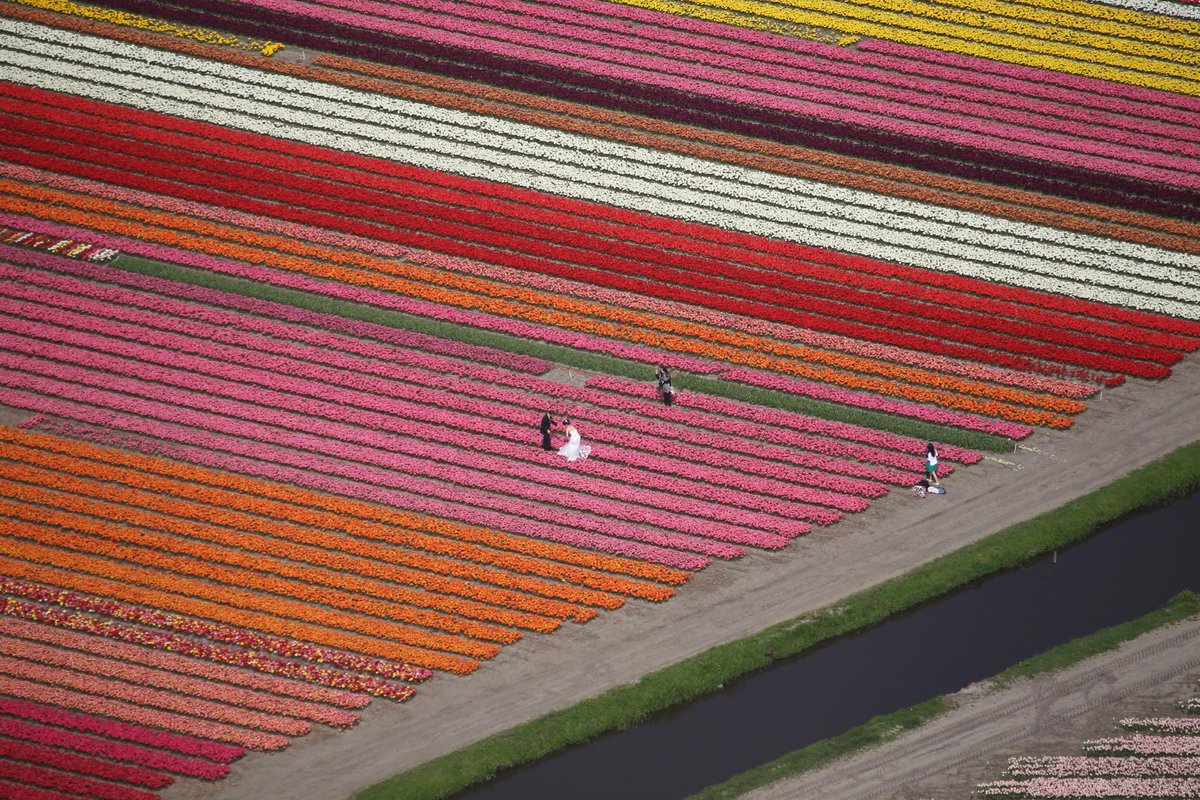 A bridal couple caught posing in the middle of tulip fields. Photo: Politiehelikopter.nl

Flower farmers in the Netherlands are asking tourists to avoid posing for selfies in the middle of their fields, to avoid damaging the plants.

Thanks to an initiative from the cultivator WAM Pennings, the Netherlands’ so-called bulb district will soon feature banners, signs, barriers and volunteers, encouraging tourists to enjoy the spring flowers from a distance.

‘We have absolutely no trouble with tourists, and we’d like as many as possible to enjoy it, but sometimes it goes too far,’ said Dave Pennings, who works at the firm. ‘On busy days, and especially at the weekends, a lot of people come and stand near the fields and if just a few walk in, all of the rest follow. That’s the danger – one person doesn’t matter so much, but masses of people do.’

He said that the damage can be more extensive than tourists might think. ‘If plants are trampled, there’s damage that you can see, but the other damage it causes is that the bulbs underneath won’t grow,’ he explained. ‘Walking among them can also cause diseases in the plants, which we want to avoid.’

But the message – which also appeared at a smaller scale on signs last year – does not yet appear to have been taken up by some of Amsterdam’s marketing agencies. On Tuesday, I amsterdam sent out a tweet encouraging tourists to ‘take some time for yourself and get lost in fields brimming with millions of blossoming flowers in every colour of the rainbow.’

1. Take some time for yourself and get lost in fields brimming with millions of blossoming 🌻 🌷 🌹  in every colour of the rainbow.

See the top 10 things to do in the Amsterdam Area’s Flower Strip:  https://t.co/2WRayxWaqJ pic.twitter.com/iY2HCcsqrM

It described the flower fields as ‘Amsterdam Area’s Flower Strip’, promoting an article on 10 things to do in the area that produces 70% of the world’s commercially-traded flowers.

Pennings said that this tweet was not quite in tune with the farmers’ concerns. ‘We wouldn’t be very happy about that, of course,’ he said. ‘That’s going in the wrong direction and it’s really not the idea! That’s the danger of social media.’

Janine Fluyt, a spokeswoman for amsterdam&partners city marketing agency, said that there is no specific campaign regarding tourist behaviour in the flower fields, but that they have been encouraging visitors to act with respect in general.

‘In a broader sense, you are welcome here if you come and respect the city, everything and everyone in it,’ she said. ‘I get [the flower farmers’ initiative] of course. It’s all about the picture and not the place you are in. That’s our selfie society. But we are focusing on bad behaviour that causes trouble and can get a fine.’