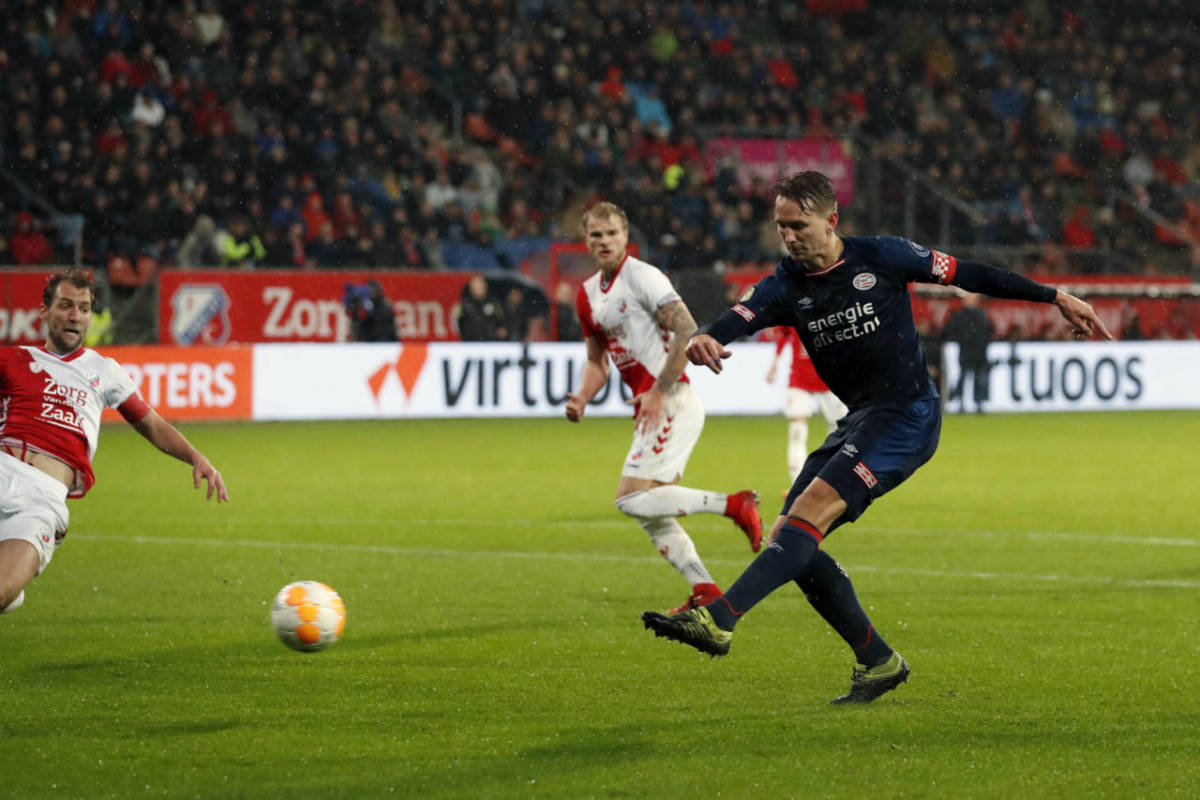 PSV Eindhoven missed the chance to go eight points clear at the top of the Eredivisie on Sunday as they were held to a 2-2 draw in Utrecht.

The league leaders were 2-0 behind against Dick Advocaat’s side at half-time, but Luuk de Jong rescued a draw with his 19th and 20th goals of the season.

Ajax are now six points behind following a calamitous 1-0 defeat to out-of-form Heracles Almelo. A hapless defensive display was epitomised by Heracles’s goal, which came when Andre Onana kicked a clear-out straight to Mohammed Osman, who fired into the vacant net.

Captain Matthijs de Ligt branded the team’s display ‘scandalous’, while a spluttering Erik ten Hag said his team had been unable to handle Heracles’s high-tempo approach. ‘We were terrible in possession, which I’m not used to seeing from this team,’ he told NOS.

Ten Hag also has a fitness concern ahead of Ajax’s Champions League match against Real Madrid on Wednesday after Frenkie de Jong was taken off 10 minutes from the end with a groin injury.

The only team in the top three to win were Feyenoord, who dispatched De Graafschap 4-0 in Rotterdam with goals from Tonny Vilhena, Calvin Verdonk, Jeremiah St. Juste and Jens Toornstra.

AZ Alkmaar strengthened their hold on fourth place and continued their fine New Year form with a 3-0 win at NAC Breda, who remain rooted to the bottom of the table. AZ have won all five of their matches in 2019 without conceding a goal.

Emmen and Groningen both moved away from the relegation zone with home wins over ADO and Vitesse Arnhem respectively. Emmen needed another of their trademark late shows as captain Arco Janssen scored the winner in the 88th minute, after ADO had come back from 2-0 down.

Groningen left it even later to snatch the points against Vitesse, with Mohamed El Hankouri’s winner coming a minute into injury time. The Arnhem side have dropped points after the 90th minute for the last three games in a row.

Heading in the opposite direction are Heerenveen, who drew 1-1 at home to PEC Zwolle to stretch their winless run to six matches, and Willem II, who lost 2-1 in Venlo. Just three points separate WIllem II, in 10th place, from 16th-placed Excelsior, who dropped into the bottom three after going down 4-1 at Fortuna Sittard. Zwolle, Groningen, ADO Den Haag, Emmen and Heerenveen are also hovering just above the drop zone.